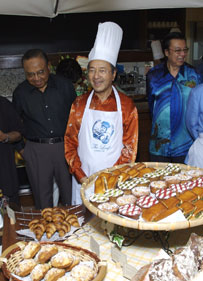 From mega projects Dr M has come full circle to launching teeny-weeny projects, observes our Loafer. Finally, his Look East Policy appears to have borne fruit or, should we say, bread. Dr M, in partnership with a Japanese entrepreneur, has started a bakery chain — The Loaf. (Photo credit: theloaflangkawi.com)

When Dr M attempted to seek election as a delegate from Kubang Pasu to the Umno General Assembly, many Malaysians wondered why he was stooping so low. When he was rejected by his ex-constituents, he cut a forlorn, indeed a pathetic figure. His so-called blood brothers in UMNO turned into bloody brothers and mercilessly savaged him. I was reminded of Tennyson’s Ulysses exclaiming in despair:

It little profits that an idle King
By this still hearth, among these barren crags
Matched with an aged wife, I mete and dole
Unequal laws unto a savage race,
That hoard and sleep, and feed …

From mega projects Dr M has come full circle to launching teeny-weeny projects. Finally, his Look East Policy appears to have borne fruit or, shall I say, bread. Dr M, in partnership with a Japanese entrepreneur, has started a bakery chain — The Loaf. Dr M was never known for managing the nation’s finances prudently and now even if he feels an inner desire to run amok with the chain’s finances, his Japanese partner will pull the brakes on him.

His defeat at Kubang Pasu left him deeply bitter and indifferent to UMNO affairs. According to Kahlil Gibran, the renowned Lebanese poet, “If you bake bread with indifference, you bake a bitter bread that feeds but half man’s hunger.”

Since his retirement Dr M has not had his way and neither has he got what he wanted. We wish his bread company success. After all, half a loaf is better than no bread.

Like Ulysses, Dr M need not lament that his people “know not me”. He has joined the brigade of the ubiquitous Malaysian “bread-man”. Ting, ting, ting.

Originally published in aliran.com on 22 May 2008