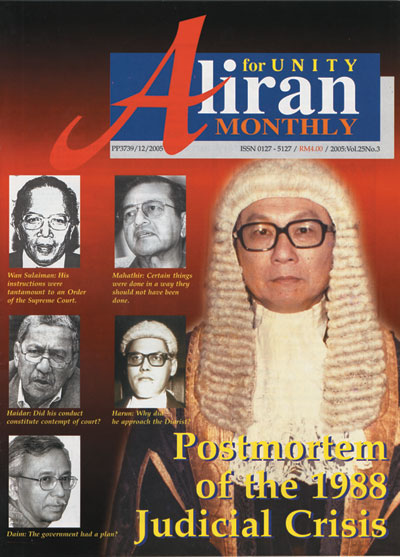 The watch for an independent, principled and progressive judiciary, worthy of the people, continues, writes Prema Devaraj.

1988 will long be remembered by Malaysians as one of the blackest periods in our short history as an independent nation born with a commitment to parliamentary democracy and constitutional rule.

For in that year, the Barisan-dominated Parliament passed an amendment to the Malaysian Constituition (Article 121) which was nothing less than a shameless assault upon the integrity and authority of the Judiciary.

The “doctrine of separation of powers” that is the Judiciary as a separate and independent branch of State from the Executive and Legislature was rendered meaningless…. the amendment has destroyed one of the basic fundamental features of the Malaysia Constitution….

The downhill slide continued when, following Reformasi in the late 1990s, allegations of manufactured evidence and instructions from above surfaced in court cases. Public confidence in the judiciary hit an all time low.

We witnessed the conviction of Zainur Zakaria, the former president of the Malaysia Bar, in 1998 for contempt for having made the mistake of filing an application in court on the instructions of a client in a cause celebre, and the ruling by the Court of Appeal that no person, body or institution could dicuss the conduct of a judge, good or bad, except parliament.

Some 300 lawyers marched to the Federal Court with chants of “We want Justice!”, donning white ribbons for justice on their black jackets but still the judicial downhill slide continued.

In 2007, over 2000 lawyers marched in Putrajaya calling for the sacking of the chief justice … Banners with message

s such as “Stop the patronage, Stop the rot” were carried.

The then president of Aliran said in his statement ‘Redeem the judiciary: Appoint Royal Commission of Inquiry’: “If we love justice, honour the rule of law; if fairness and truth means anything to us; then we must pay heed to the saying ‘There is always time to make right what is wrong’.”

But many court judgments on key issues continue to raise concern e.g. the Altantuya case, police shootings, deaths in police custody, the Teoh Beng Hock case, the Allah decision, and the question of guardianship of minors in conversion cases.

The watch for an independent, principled and progressive judiciary, worthy of the people, continues.