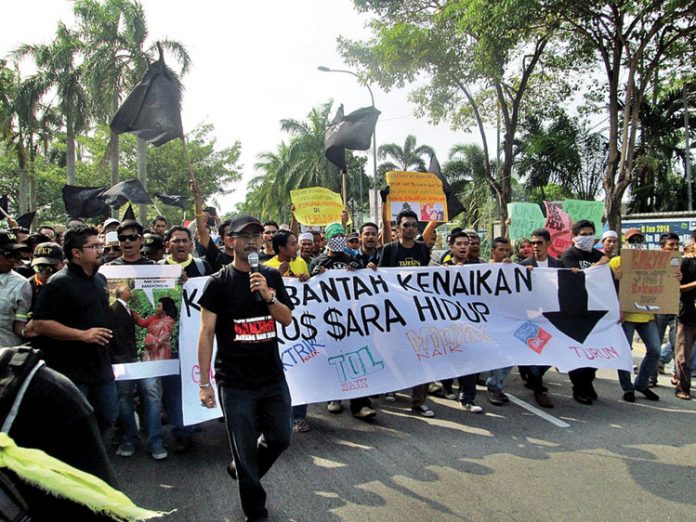 Angeline Loh recounts Aliran Monthly’s journey and how its discussion of workers rights and later the influx of migrant workers and refugees was connected with globalisation trends.

Let’s look back, from this stage of maturity to our younger days, the early days of Aliran Monthly. At this stage, we remember the highlights of our lives. Despite its apparently ‘traditional’ alternative approach to issues for justice, freedom and solidarity, AM has to all intents and purposes kept abreast of the impact of events that affect and change, not only in Malaysian society but the international milieu as well.

Globalisation is now a firmly entrenched and real phenomenon with the broadening of international solidarity expressed openly by peoples far and wide; most recently, the worldwide protest against the conflict and carnage in Palestine.

Looking into the past, the expression of international i.e. global solidarity is not something new but something we have gradually come to know about, and finally accept in this IT era, a dream of yesterday but a fact today.

Back in 1984, when the fledgling Aliran Quarterly took flight as a full-grown Monthly, the earliest issues of AM maintained strong momentum as a means of expressing and communicating thoughts that mainstream media, specialist journals, academic works and other texts rarely gave public voice to.

One of the items that appeared in an AM article which made a lasting impression of hope was the affirmation by students of the University of Malaya’s Law Faculty on 10 December 1983, of duties, rights and obligations under the Federal Constitution and the Universal Declaration of Human Rights (vol 4 no 1, 1984).

This was a step into the global arena for thinkers joining the intelligentsia of the nation, not a new development for Aliran, but an acknowledgement of the nation’s link to the rest of humankind on World Human Rights Day 1983.

Globalisation, in the context of the AM, was more an analysis of global social justice and human rights issues which did not discount the role of politics, spiritual values, ethics, and political economics. This holistic angle is alien to those preferring theoretical, apolitical treatises on subjects like human rights.

Aliran Monthly, therefore, has been a unique periodical, not one simply to stimulate the mind, but one that has not shied away from admitting the existence of the human soul (see ‘Islam in Indonesia: where to? – Interview with Adburrahman Wahid; vol 7 no 5, 1987).

AM boldly went where few publications would have gone before. It sought to cover and uncover thoughts and views that were principled, well reasoned, but less heard or bandied around by the mainstream media.

Its main writers and contributors often were among the ranks of known intellectuals, academicians, teachers, social and political activists, politicians, economists, judicial personalities, trade unionists and a range of other people, who took to the dictates of conscience, rather than that of the establishment.

For Aliran Monthly, globalisation took the form of discourse on the impact of current global trends (see Susan George’s ‘Debt’ vol 9 no 5, 1989) or the link between a significant event relating to Malaysia which had an impact on the world at large (see Robert Nash’s ‘Malaysia Incorporated policy turns sour’ vol 7 no 3, 1987).

Still the issues discussed by Aliran Monthly were, in analysis, grounded in human rights. For at least two consecutive years, 1987 and 1988, an article on apartheid in South Africa, was never left out of AM (see Tong Veng Wye’s ‘Apartheid in South Africa’ vol 7 no 4, 1987; the editor’s comment on apartheid vol 8 no 8, 1988; the editor’s ‘Declaration against apartheid’ vol8 no 9, 1998; and R Elangovan’s compilation ‘Shell’s role in fuelling apartheid’ vol 8 no 9, 1988).

AM’s network came in useful, when Aliran itself needed global solidarity, when in 1987 the ISA hatchet was dropped on its president and two other members for their openly critical stance on issues the government preferred to be opaque on. The global outreach of AM elicited global support in our crisis (Operation Lallang: ‘Solidarity Messages to Aliran’ vol 7 no 10, 1987).

But that seemed only the beginning. In 1990, when an application for a licence for publication of a Bahasa Malaysia version of AM was refused, even by the courts, the international support extended by various organisations, politicians and individuals was overwhelming and deeply moving (see ‘Why no permit’ by Asia Watch, affiliate of Human Rights Watch, vol 10 no 2, 1990; ‘Freedom, Voices of Support’ by The Newspaper Guild, International Centre of Censorship, Article 19, Lawyers Committee for Human Rights, vol 10 no 4, 1990).

Inadvertently, AM had put Malaysia on the international radar, which was realised when AM raised awareness of human rights violations and environmental destruction in Sarawak (‘Europe alarmed over arrest of Penan’, The European Parliament, vol 10 no 2, 1990).

This sector of the working class is still a flexible category as it includes many of the marginalised and disenfranchised impoverished communities in the country (see K Palani’s ‘Squatters resist oppression’, vol 7 no 1, 1987; a letter on Graduate Unemployment, vol 7 no 9, 1987; and Jannie Lasimbang’s ‘Fending alone: Schooling for a kampung girl’ vol 7 no 9, 1987).

But the AM did not stop at merely giving support; it became a vehicle for critical review and analyses of the workings of the establishments even among trade unionists (see K George’s ‘Clean up or get cleaned out’ vol 9 no 12, 1989) and went on to allow open debate on trade union issues (see ‘Nube replies’ Parts 1 and 2, vol 10 no 3, 1990).

The Monthly covered a spectrum of working class communities, although the grassroots themselves were at that time insufficiently literate to participate in written discourse, except for the group of leaders who had achieved at least a secondary school-level education.

Still, the AM gave voice to these communities through the writings of concerned persons, rights advocates and activists who spoke out strongly against injustice and inequality (see a letter by Arutchelvan Subramaniam ‘Plantation workers deprived of basic amenities’, vol 10 no 2, 1990; R Elangovan’s ‘Tragedy at Suffolk Estate’, vol 9 no 9, 1989; Terence Gomez’s ‘Struggle for shelter’, vol 7 no 9, 1987; and Mary Lean’s ‘Famine, farmers and food, vol 8 no 8, 1988).

Over the next 10 years, with rapid economic development, the working class saw far-reaching changes, intensified by economic and political globalisation, which brought new challenges originating beyond the nation’s borders.

The migrant trickle, which initially seemed to some extent a novelty, started to become a river in the 1990s, then a flood as the new millennium loomed. Economic and political exigencies intensified the necessity for people to migrate for various reasons.

With its habitual realism, the AM did not neglect to take note of and critically view these developments. From local labour issues, which appeared to be slightly on the wane, the focus on migrant workers’ issues began to widen. With the inflow of migrant labour, other aspects of human and labour rights application and abuse arose (see Angeline Loh’s take on ‘Charles Hector’s case: A judicial denial of justice’, vol 31 no 9, 2011).

Migration issues became more visible, as did the challenges migrants began to face even up to the last general election. True to its character, the AM published critical and crucial questions about the state of immigration controls (e.g. Aliran’s media statement ‘Redundant Rela’) and migrant workers rights, and Aliran will no doubt continue to do so.

In 2007, the AM began a wider and deeper discourse on refugee issues due to the increasing awareness of existing refugee communities and the opening up of the refugee debate between civil society groups, the United Nations refugee agency, and the federal government (see Angeline Loh’s ‘Sweeping dirt over the UNHCR carpet’ vol 27 no 3, 2007; and the Aliran Exco’s ‘Rohingya refugees dilemma remains unsolved’, vol 27 no 4, 2007).

But this was not the first time refugee and migrant issues had been raised in Aliran Monthly. Yet this previous discourse on migrant and refugee issues was not an indepth one; it only appeared in short letters or complaints raised in the ‘Letters’ or ‘Current Concerns’ columns (Letters ‘Appeal for help for Burmese student refugees’ vol 9 no 3, 1989; Chandra Muzaffar’s Current Comment, ‘Illegals and Christian conversions’, vol 7 no 8, 1987; and N S Sivam’s letter ‘Illegal immigrants and refugees in Sabah’, vol 10 no 4, 1990).

Aliran Monthly’s journey over the past 33 years has been in step with the evolution of this country and its inevitable connection with globalisation. The closing of AM’s hard copy journal nurtured with love and diligence since 1980 is not the end, but a new beginning, where wisdom, critical thinking, humanity, peace and justice are still relevant and necessary, as are the core principles of Aliran itself.

Aliran will continue to uphold its motto of ‘Justice, Freedom, Solidarity’ in cyberspace where thinking is allowed and free discourse continues at aliran.com.