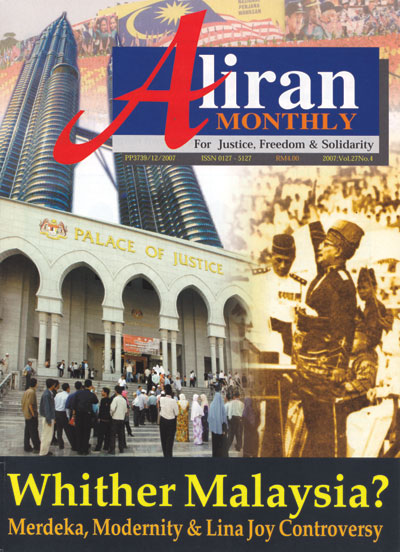 Malaysians need to put aside any discriminatory thoughts and uphold mutual tolerance, understanding and respect, ethics that are encouraged by every religion, observes Syerleena Abdul Rashid.

In 2007, Aliran Monthly (vol 27 no 4) highlighted the controversy surrounding Lina Joy’s court case which will forever be etched in the memories of Malaysians who believe in the importance of upholding human rights especially matters concerning freedom of religion.

This particular case served as a reminder for all about the delicate nature of race and religious matters in our country.

Born Azlina Jailani, Lina Joy converted to Christianity at the age of 26 and was baptised in 1998. Although she was able to legally change her name, omitting Islam from her identity card proved to be an uphill battle.

The refusal to allow her to live openly as a Christian highlighted the harsh reality of religious freedom in Malaysia – only non-Muslims seemed to be able to practise this whereas Muslims were bound from the day of birth.

Francis Loh in his cover story “Merdeka, modernity and the Lina Joy controversy” further questioned the rights of an individual versus group rights. “In Lina Joy’s case, the Federal Court in a 2-1 decision ruled that Lina Joy does not have the right to move in and out of her religion at her own whim”, therefore solidifying the fact that that sort of religious freedom is not extended to the Muslim Malaysian community; Article 11, which guarantees freedom of religion, is not applicable for Muslims.

Lina Joy, who had lived as a Christian for over a decade, unsuccessfully battled the courts’ decision in denying her that right as a citizen or as an individual because granting such permission would undermine the rights of Muslims as a group.

Sadly, Lina Joy is not the only case that exhibited the harsh realities of restricted religious freedom imposed to anyone ‘labelled’ as a Muslim.

We witnessed child custody battles involving a parent who had converted into Islam such as in the cases of Shamala Sathiyaseelan and R Subashini (whose respective husbands converted to Islam) – who were denied their constitutional rights as mothers, when the Syariah Courts granted custody to their Muslim ex-spouses.

We also saw a growing trend of ‘body snatching’ by religious departments, who claimed the bodies of Moorthy Maniam @ Mohammad Abdullah and Rayappan Anthony.

These cases show the utter lack of compassion by authorities when dealing with such sensitive issues and grieving families.

In addition, political leaders and the government were also called upon to govern nations by upholding the spiritual betterment of society as a whole, irrespective of political, religious and ethnic considerations or affiliations.

Clearly, the verdict of Lina Joy’s case, as announced on 30 May 2007 exhibited otherwise and she reminded us that “no court or authority should be easily allowed to have implied powers to curtail rights constitutionally granted”.

The late Karpal Singh also released a statement regarding the matter which was carried in the same issue of the AM. He opined that a full bench, rather than a three-person bench should have sat.

He therefore called for repealing Article 121 (1A) of the Federal Constitution which came into force in 1988 and that a nine-member bench review the matter.

What happened in Kampung Rawa?

Stories of multi-ethnic disputes have always found a way of popping up every now and then in Malaysia. But during the weekend of 27-29 March 1998, such a dispute peaked and Malaysians witnessed how bad such disputes could be.

A riot broke out in Kampung Rawa, Penang which resulted in the arrest of 185 people, though, there were no reported casualties or any reported desecration of mosques, temples or property.

The real causes of the riots were never disclosed and due to a lack of media transparency surrounding the case, many Malaysians were left to speculate on the causes.

The common assumption was that the dispute resulted from “the close proximity” between a Hindu temple (Sri Raja Raja Mathuraiveeran) and a mosque (Masjid Kampung Rawa).

Another assumption was that the conflict arose due to the failure to abide by rules and regulations concerning the construction of religious buildings, in this case the temple.

But history paints a different story of how multi-ethnic communities were able to co-exist harmoniously in the past. Religious buildings had always been situated side by side, and a visitor talking a tour around the historical enclave of George Town will witness places of worship built close to one another – a testament of religious tolerance upheld by our ancestors.

The first “showdown” between the Hindus and Muslims occurred on 20 March when a group of 200-250 Muslim men, mostly Indian Muslims, confronted a group of Hindu youths for “disrespecting the Friday call for prayers”.

A series of little disputes occurred in the following days, but on 27 March, the situation exploded. During the Friday prayers, an estimated crowd of 5,000-7,000 people gathered at the Kampung Rawa mosque. Apparently, they had received information (by word of mouth – social media did not exist back then) that there would be some sort of attack from the Hindus – a retaliatory attack “for the demolition and relocation of their temple”.

Needless to say, the situation escalated and spilled over beyond the borders of Kampung Rawa. Several places of worship (on both sides), shops and restaurants were vandalised. Hindu-Muslim clashes had also spread to Seberang Perai and Kedah. Though there were reports of sporadic incidences on the 28th, by the 29th things had simmered down quite significantly.

Throughout the whole ordeal, only two press conferences were carried out to address the issue of Kampung Rawa – the first by the deputy prime minister and the second by the inspector-general of police. The lack of authentic information and reports fuelled more rumours and left Malaysians with more questions than answers.

The article in AM sought to analyse the whole situation dispassionately. It showed that the incident involved both Indian Muslims and Indian Hindus, and was likely also influenced by the general election that occurred in India.

Some quarters had been distributing videostapes that depicted racially motivated attacks associated with the Hindu Bharatiya Janata Party (BJP), and this could have been one of the contributing factors that led to the unrest.

Additionally, due to the difficulties in obtaining Malaysian citizenship and the regular influx of Indians (both Muslims and Hindus) to Malaysia, a significant number of Indians remained Indian nationals. Interestingly, as a way out, some chose to “associate more closely to the Malays to the extent of marrying Malays and even joining Umno”, hence, acquiring bumiputera status and the privileges associated with such “membership”.

As a result, other members within the Indian community remained marginalised and were sidelined economically. Subsequently, misrepresentation from political parties only made the situation worse and created more tension between the two communities.

he Kampung Rawa incident clearly underlined “intra-communal sentiments of resentment and animosity” as a result of inter-religious differences. To prevent this from happening in the future, the Malaysian government must officially recognise the dilemma Penang Indians are faced with and the best way to do this is by prioritising inter-religious discussions, inclusiveness and tolerance.

In the same issue of the AM, the article: “Faith, ferment and fissures”, written by Mustafa K Anuar, provides an insightful footnote; a reminder that “if the religious leaders had spoken out for inter-religious tolerance, they would have affirmed their communities adherence to a fundamental truth – that is, that a wrong is a wrong, irrespective of one’s faith”.

Malaysians need to put aside any discriminatory thoughts and uphold mutual tolerance, understanding and respect, ethics that are encouraged by every religion. And leaders must speak out too against extremism.