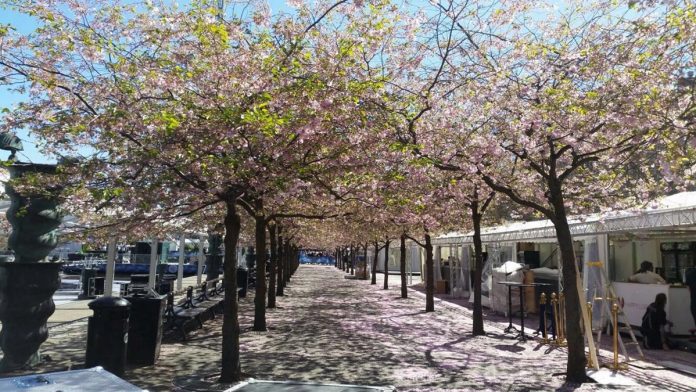 From the creative artwork on display in Stockholm’s metro system to the efficient bus rapid transit in Curitiba, we have much to learn, writes Benedict Lopez.

One of the delights of my stay in Stockholm was commuting everywhere on public transport, be it the underground train (tunnelbana), commuter train (pendeltåg), red and blue bus, tram rail and ferry, using the SL Access Card.

When I left Stockholm at the end of June 2014, I could buy a monthly SL Access Card for only SEK790 (RM350), which gave me unlimited travel all over the city and its suburbs. A special discount is given for senior citizens.

This mode of transportation is extremely cheap. It was precisely for this reason that I did not own a car in Stockholm. I only used my official car in the course of my duties.

I wish we could implement the same system in Kuala Lumpur as it will go a long way towards alleviating the financial burden of less fortunate members of society who have no choice but to use public transport. Many have to travel daily to KL for work from places like Rawang, Port Kelang and Seremban.

Stockholm’s efficient network of public transport is the reason for the rarity of traffic jams in the city. The city’s underground and commuter lines cater to the needs of its residents, with the terminus at the Central Station or T-Central.

Artistic beauty graces the Stockholm subway, which is widely regarded as the world’s longest art exhibit – 110km long. This exquisite showcase, which enchants travellers and tourists, is draped with history dating back from the masterpieces of artistic pioneers of the 1950s right up to the work of contemporary artists.

Sculptures, mosaics, paintings, installations, engravings and reliefs by over 150 artists decorate more than 90 of the 100 subway stations in Stockholm.

The Kungsträdgården station looks like an archaeological excavation, with the remains of the old Stockholm Makalös palace. The Östermalmstorg station focusses on women’s rights, peace and environmental issues. I always admired these ingenious works whenever I was at these stations.

Perhaps, the management of our train stations can encourage our artists to beautify our train stations too. I always marvelled at these artists’ inspirational paintings in places like KL’s Central Market. After all, art is the human expression of creative skills in painting or sculpture.

Once you disembark at most underground or commuter stations in Stockholm, a bus stop is within walking distance, connecting all parts of the city.

The red and blue buses in Stockholm are very long, with either two or three entrance and exit doors, and the routes criss-cross the city. The middle portion of the bus is an empty space reserved for anyone who embarks with a baby on a pram, and it is free of charge.

I had always noticed the utmost care and caution exercised by bus drivers, constantly looking back to see if all the passengers are on board before continuing the journey.

When the bus stops at a station, the exit door opens, and it is always adjacent and parallel to the bus stand, in contrast with our buses where the exit door is about a foot above the road, making it precarious for senior citizens, people with disabilities and expectant mothers to alight.

Stockholm is a drivers’ paradise as traffic rules are stringently observed. Disciplined motorists respect pedestrians’ rights at traffic lights and zebra crossings, and any driver caught flouting traffic regulations will face the wrath of the law, with heavy fines imposed.

In comparison, it is a nightmare to cross many roads in places like Bangsar in KL. On a number of occasions, I was nearly knocked down by reckless drivers who blatantly disregard flashing pedestrian crossing lights.

Most people from Stockholm and its vicinity commute daily to work on trains and buses, and it common to see even politicians and corporate tycoons using public transport.

Many in Stockholm cycle to work daily, even during winter. Cycling lanes are found all over the city.

Ferry travel in a fresh, clean and pollution-free city

Stockholm consists of 14 islands within the archipelago, and therefore ferry services are also used.

Being an exercise freak, I often walked two kilometres from my apartment in Hornsgaten to board the ferry at Slussen when heading for a jog in the park in Skansen. The ferry ride from the pier takes around 20 minutes, and I could never resist taking deep breadths and appreciating the fresh clean air while on board the ferry.

On my return journey, I had the option to either hop onto a bus or a tram car, adjacent to the park, which took me to Central Station, where I could board an underground train to my home.

While impressive strides have been in Kuala Lumpur’s public transport system over the last three decades, the city nevertheless faces recurrent traffic jams. A comprehensive network of buses, taxis, monorail, light rail transit and commuter trains has only slightly assuaged this problem. Hopefully, the new LRT lines when in operation would help resolve traffic congestion.

KL Sentral is a well-developed transportation hub where you can take the LRT, KTM trains, Rapid KL buses, ERL and even check-in your airport luggage. KL’s train stations, in some respects, have an edge over Stockholm’s, as unlike the latter, the former contains more amenities and with clean washrooms.

The city’s commuter rail services also need to be upgraded. The other day, I took a commuter train from KL Sentral to Mid-Valley and had to wait for 45 minutes to just travel one stop. The humidity at the station was unbearable.

Bus services can also be improved. Passengers continuing their journey by feeder bus services from the LRT stations to residential areas in the vicinity at times have to wait around 20 minutes. Sometimes I have to wait around 20-30 minutes for a Rapid KL bus from the terminus in Jalan Cheng Lok to Bangsar. More licences need to be issued to bus companies to ply this route.

KL is also in dire need of an improved drainage system. A few weeks ago, when the city experienced flash floods after a heavy evening downpour, traffic came to a standstill along Jalan Bangsar for about 45 minutes.

Penang too is embarking on an ambitious, expensive and controversial transport masterplan to solve the city’s traffic problems. Hopefully, the colossal sum of over RM40bn, funded by the sale of public assets (reclaimed land), can be justified and will contribute towards lessening the state’s traffic woes.

KL and Penang should look towards Curitiba, a city of 2m residents in eastern Brazil, that has transformed itself into one of the most livable cities in the world. Today, Curitiba is globally recognised as an exemplar in sustainable development and was bestowed the Global Sustainable City Award in 2010.

The then mayor, Jaime Lerner, described as a man ahead of his times, defied conventional wisdom that “development” is symbolised by building more highways and bringing in more cars. Infused with political convictions, he bucked the trend and implemented his vision for the city based on the premise of sustainable development.

Upon assuming office as mayor, Lerner found that the city’s buses were carrying only 20,000 passengers per day, but today, they transport more than 2m a day. The city’s bus system is one of the few in the world that is financially self-sustaining. Commuters pay a single fare, irrespective of the distance travelled, and 85 per cent of people living in the city use this mode of transportation.

Curitiba today is filled with parks and green spaces and has four times more greenery despite its population tripling over the last 20 years. The city uses federal funding for greening the city, primarily aimed at flood mitigation measures: this is accomplished by building small dams across rivers and creating lakes and parks. With 28 parks and forests in the vicinity, Curitiba’s landscape contrasts sharply with other developing cities.

Well known for thinking outside the box, Lerner cut costs by using sheep to graze in the parks as a substitute for lawnmowers. Always prioritising people’s interest above anything else, he shunned the limelight like cutting ribbons everywhere, and once remarked, “….one has to feel inside about the daily problems of the people.”

Lerner set a high benchmark to be emulated by mayors and politicians all over the world. If we had more like him, then we definitely can combat climate change and global warming, while making our world an environmentally better place for us and future generations to live in.

Our ministry of urban wellbeing, housing and local government should engage consultants like former mayor Lerner and tap their expertise in managing cities.

Urban planning and sustainable development requires a holistic approach involving consultations with all affected groups. Subscribing to this model requires political will and inevitably contributes towards tackling a city’s economic, energy, and environmental challenges. Time saved by commuting by public transport could have significant multiplier effects on the country’s economy too.