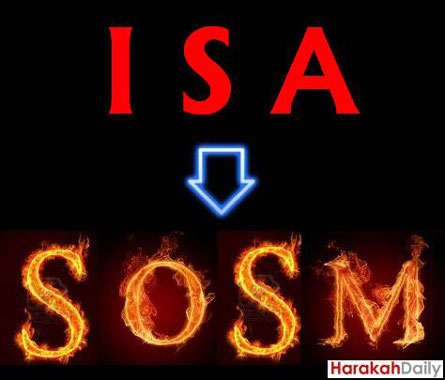 The arrest of a SAMM political activist poses a grave danger to the rule of law and the liberties of all Malaysians, says N Surendran.

I refer to the arrest of Solidariti Anak Muda Malaysia (SAMM) activist Saiden Ismail under Sosma 2012 on 30 April 2014 by counter-terrorism police.

We are shocked and appalled by this arrest of a political activist under counter-terrorism laws. No evidence whatsoever has been produced linking Saiden with any kind of militant activity. If there is any such evidence of terror activity, why not charge Saiden in open court?

It is also extremely disturbing that the detained person is a member of a group (SAMM) which is a strong critic of the Umno/BN government. It is illegal and unconstitutional for the government to use terror laws against political critics and dissenters.

Section 4(3) of Sosma clearly states that no person is to be arrested and detained “solely for his political belief or political activity”. This section was specifically inserted to prevent the government from abusing Sosma for political purposes.

In its effect, Sosma is similar to the ISA as no bail is allowed pending trial and appeals. Through Sosma, the government has re-introduced the ISA through the back door.

The arrest of SAMM political activist Saiden poses a grave danger to the rule of law and the liberties of all Malaysians. Once again Malaysians are under threat of long-term detention solely for carrying on legitimate political activities.

We are also gravely concerned for Saiden’s well-being in view of the physical abuse and torture that happened to detainees under the old ISA.

The Najib government has blatantly broken its word that Sosma will not be used against political opponents.

We demand that Saiden Ismail and all others recently arrested under Sosma 2012 be released immediately and unconditionally. We further call upon the government to abolish Sosma 2012 and investigate and charge suspects under ordinary criminal laws.

N Surendran is the Member of Parliament for Padang Serai