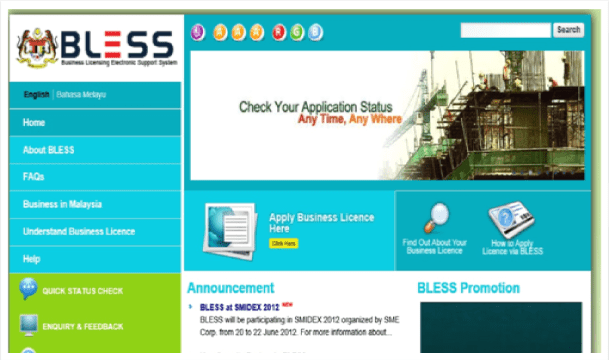 Initiatives such as the ‘Business Licensing Electronic Support System’ (Bless) should be encouraged and facilitated.

Such measures are proactive steps taken to ensure that the civil service and regulatory authorities move from an enforcement mentality to one of ‘service with accountability’.

Dealing with the issue of licenses, Bless, an initiative under ‘Pemudah’, was launched with a total of 101 licences covering three sectors, namely manufacturing, hotels and construction. These sectors contributed greatly to the national economy in 2007.

Bless has also increased its coverage accepting applications from CCM-registered companies to the Registrar of Societies and the Co-operative Commission, individuals, government agencies and institutions. From an initial involvement of 28 federal agencies and 101 licences available for application through Bless, this has now increased to 51 federal agencies, 208 licenses and permits for approval.

The aim is to provide ease of access for anyone doing business in Malaysia making applications easier, faster and within a time line. This cuts out of a lot of human intervention, and the temptation to abuse power and indulge in corrupt practices is thus greatly reduced.

Currently with 117,000 users, there is a reluctance amongst several federal and state agencies to implement this one-stop approach to business licensing. Only those sectors that have made this compulsory are gaining from using Bless like the Health Ministry in relation to pharmaceutical licensing.

Those agencies that are still dragging their feet include local authorities, the DBKL, immigration and customs, the Road Transport Department and the police. The public perception of all the above mentioned departments remains negative, and from the recent exposure relating to Customs, this may underline why these departments do not find ‘Bless’ useful or helpful for them. The immigration, customs and police need to be reigned in to ensure both transparency and accountability are enforced.

The MACC’s report in 2010 highlights that RM108bn was lost through abuse and weakness in the system leading to corruption in the Customs Department alone. Add to this the Police and Immigration Departments and the amount lost annually would be staggering. The sad reality is that no one at the top is held liable nor accountable.

The Business Ethics Institute of Malaysia (BEIM) lauds the ‘Bless’ system and approach, and hopefully with education and training provided, organisations like the various chambers of commerce, business bodies and the international/Malaysia business organisations could all be engaged to support the cause of Bless and promote its use.

The government on its part should ensure compliance and delivery. System competence is also very critical. The 2013 KPMG survey shows that 71 per cent of respondents believed that bribery is an inevitable cost of doing business in Malaysia.

The BEIM believes that this perception must be changed. Despite evident short comings we must encourage approaches like Bless, which will eventually save the nation billions of ringgit in revenue. Beyond anti-corruption measures, these are proactive steps that contribute towards the creation of a good business culture and environment.

We hope that the compliance committee supervised by Datuk Paul Low will make a strategic difference to the cause of ‘Bless’ and business ethics in general by ensuring compliance by more authorities.

K Haridas is the chairperson of BEIM