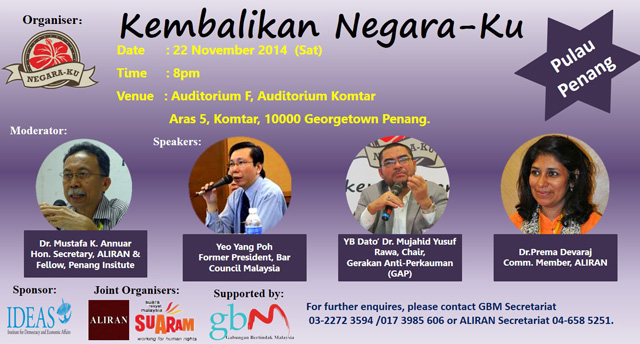 Can we picture a Malaysia free of racial tensions and the clutter of racial politics?

What will the dynamics of the country be like? One where the race cards are not used to the whims and fancies of the powers that be.

We hear extremist views, propagation and actions depicting an extremist concept all the time either by government authorities or bodies endorsed by the government or several NGOs. And the negative repercussions are terrifying. The effect is many pronged.

As ordinary Malaysians, we are confused as to the direction Malaysia is taking. We are all assured by the Federal Constitution, the Rukun Negara and the Malaysia Agreement, not forgetting the Proclamation of Merdeka, that one of the pillars of this country would be equality.

But the increasing propagation of extremism and the notion that Malaysia is not a secular state, with an overemphasis on one race and one religion, is not very assuring for all. Worse, the issue of race and religion has become a stronger factor, when it ought not to be a factor at all, fuelled by the mainstream media to be swallowed whole by naïve village and rural citizens.

What ought to be a driving force, however, is moderation, peace and harmony. The principles and aspirations expressed in the Proclamation of Merdeka need to be revisited and followed up with the implementation of policies that would promote national unity and the true democratic spirit of the Malaysian constitution. Malaysia was formed on the basis of equality, secularism, guaranteed fundamental rights and a prosperous state where everybody feels at home.

These basic criteria upon which Malaysia was formed is under tremendous threat. If no citizen-based effort is taken to prevent such fundamental criteria from being sidelined, Negara-Ku fears that Malaysia may evolve into an intolerant state where there is no place for peace and harmony. That is why Negara-Ku sees it as an absolute necessity to go around Malaysia to speak to the people.

If we keep idle while insensitive quarters continue propagating racism and intolerance – e.g. encouraging bible-burning and getting worked up over minor issues like the presence of the picture of a deity on mineral water bottles – it would indicate that racism, hate speech and extremism are acceptable. It is certainly not – and that message must be clearly sent.

We believe, our diversity is our biggest asset. We cannot let certain parties engineer a situation where one race is pitted against the other.

The Negara-ku People’s Movement’s roadshow is sponsored by the Institute of Democracy & Economic Affairs (Ideas) to cover seven different states in Malaysia with the ultimate aim of bringing back the essence of Malaysia.

We started with Malacca on 12 November 2014, and on 17 November, we were in Ipoh, Perak in collaboration with Ikram and Perak Women for Women as local partners.

We were in Johor Bahru on 18 November 2014 in collaboration with the local partners, Engage and Pertubuhan Ikram Malaysia (Ikram).

We are thrilled to say that we will be in Penang on Saturday, 22 November at Auditorium F, Level 5, Komtar, 10000 George Town.

We will be in another two places with the following details: