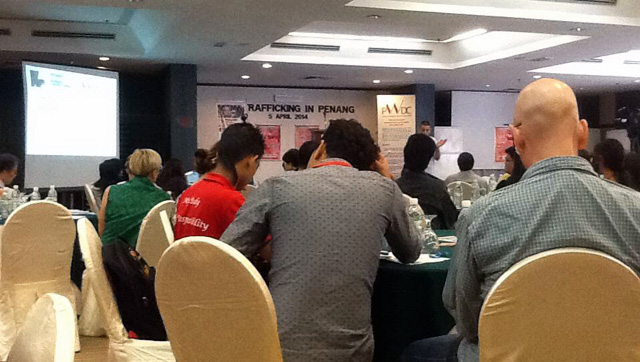 The seminar was not to sensationalise the existence of a sex industry in Penang (a feature of most cities across the world) but to say there is an issue and to look at what can be done, says The Penang Stop Human Trafficking Campaign.

Following the successful organisation of a seminar on ‘Sex Trafficking in Penang: What we Can Do About It’ last Saturday, we notice that some press coverage has taken a very negative line.

This is a pity, since the issue is a serious issue, and is about finding and supporting the women, girls, men and boys who are victims of sex trafficking and bringing criminals to justice. It is not about party politics or apportioning blame.

As the main organiser of the seminar, we would like to make it very clear that nowhere was Penang referred to as a ‘sex city’, not by the Northern Network for Migrants and Refugees (Jump) or anyone else at the seminar. Nor was there any emphasis given to highlighting Penang as being any better or worse than other cities and towns around the world grappling with the horrors of human trafficking, including people trafficked for sexual exploitation.

Far from it. The context of the seminar was to be positive in our partnerships for tackling sex trafficking in Penang. The points made by the research presented by Todd Morrison and by the other presentations and discussions at the seminar were all made in the following context:

No one is blaming anyone else for any lack of action or plan. We are not looking back, but looking forward at how we can work together to tackle the many aspects of the issue. This was also the conclusion of Todd’s presentation – the positive ways of moving ahead.

Human trafficking is a horrendous crime. It devastates peoples’ lives. Sex trafficking particularly affects women and girls, and their lives are made an absolute misery, in a way that few of us can imagine.

If we can find a way of reaching just one more victim than we would if we stood by and did nothing, then we have achieved something. But we are very sure that we can achieve a lot more than that, particularly if all stakeholders and interested parties work together and each contribute what they can.

So just to reiterate, the purpose of the seminar and of the presentations was not to sensationalise the existence of a sex industry in Penang (a feature of most if not all cities and towns across the world) nor to wave numbers in our face as definitive.

Instead it was to say “there is an issue” and share “what we can do about it”. There were many positive suggestions that came out of the discussions and these will be followed through.

It should be noted that one of the presentations talked about how jurisdictions across the world are grappling with how to tackle human trafficking, including sex trafficking. Whether in Europe, North America, Australia, or elsewhere in Asia, countries, cities and towns are all seeking ways to deal with the problem.

No one has come up with a definitive solution. Our discussions in Penang need to be put in that context: that we are just one place amongst thousands that are talking about how to combat trafficking. We can share good experiences and learn from each other. That is a part of it.

Present press coverage or not, all partners in the Campaign will continue to quietly focus on what we need to do and how best we can build partnerships and move forward. We are sad if some choose to make the issue and presentations made at our seminar something that it is/they are not.

We would much prefer it if we all could concentrate instead on what positive steps, what positive initiatives, what working together is necessary, to reach those women, girls, boys and men who are victims of sex trafficking. And to bring the traffickers and their associates to justice.