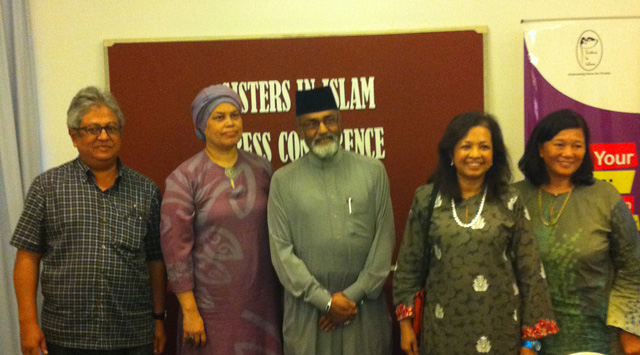 Sisters in Islam (SIS) has filed a judicial review on a gazetted fatwa in Selangor declaring SIS as subscribing to “religious liberalism and pluralism”, and therefore deviating from the teachings of Islam.

The fatwa allows for any publications deemed “liberal and plural” to be banned and seized. In addition, it calls for any form of social media that go against the “ajaran Islam dan hukum Syarak” to be blocked by the Malaysian Communications and Multimedia Commission (MCMC).

We view with grave concern the allegations made against us and question the basis for this fatwa. Since 2003, SIS has served close to 10,000 Muslim women who turned to us for legal help to seek redress for their marital problems. We have trained over 4,000 women on their legal rights through our popular legal literacy workshops. More than 90 per cent of them stated that the knowledge provided by SIS has empowered them to know their rights in Islam.

We teach women how to access the justice system for themselves and for their children, accompany them to court, and recommend lawyers to represent them. These thousands of women we have helped and trained have gone on to help others in their families and communities.

How could such activities that reflect the compassion and kindness of Islam and raise women’s awareness that there can be justice in Islam be pronounced “sesat and menyeleweng”. In 2002, the former director general of Jakim, the late Tuan Haji Shahir Abdullah, asserted that SIS work was in fact a form of “ dakwah”.

READ MORE:  NGO coalition expresses solidarity with Sarajun
Support the struggle to build a Malaysia based on Justice, Freedom, Solidarity:

The impact of SIS work has strengthened the faith of many Muslim women whose experience with their husbands and the religious authorities had led them to believe that Islam was unjust and discriminatory towards women.

It is disturbing that SIS was not informed nor were we called in to explain our work before the fatwa committee pronounced SIS as deviant. Neither does the fatwa contain any justification for its pronouncement. Nor does it explain what the terms “liberalism”, “pluralism” mean and what constitutes going against the “teachings of Islam and hukum Syarak”.

We came across the fatwa by chance while surfing Jakim’s e-fatwa website on 20 October 2014.

We are challenging the fatwa on several constitutional grounds:

Malaysia is the only Muslim country that enables a fatwa to have the force of law through a mere gazetting process and then criminalises any violations of the fatwa.

According to section 13 of the Syariah Criminal Offences (Selangor) Enactment 1995, any person who gives, propagates or disseminates any opinion concerning any issue, Islamic teachings or Islamic Law contrary to any fatwa for the time being in force can be fined up to RM3,000, or jailed for up to two years, or both. Any document or other medium [sic] may be seized and destroyed even without any conviction.

These excessive powers exercised by the religious authorities of Malaysia, with the complicity of the executive and legislative bodies, are dragging the country down the road to theocratic dictatorship.The criminalisation of non-compliance to a fatwa deviates from Islamic legal theory and practice.

A fatwa is merely an advisory opinion to guide Muslims to lead a life according to the teachings of Islam. It is not legally binding and it is optional for the individual to follow it, or seek another fatwa.

A salient principle of governance according to the Qur’an is shura, which requires those in authority to govern through consultations with the community. In Surah al-lmran, 3:159, Allah commanded Prophet Muhammad (saw) to consult the ummah on “all matters of public concern”. This was to a Prophet, so what more to subsequent generations of Muslims.

In Hadith literature, it has been reported that the Prophet (saw), in the context of both private and public affairs, solicited counsel from the Companions and at times gave them preference over his own views. In Surah Mujadila (58:1) on disputation, the right of an individual, a woman in this case, to argue her problem with the Prophet (saw) was recognised.

Sisters in Islam restates its position that if Islam is used as a source of law and public policy, then everyone has a right to engage in a debate on these matters. Public law and policy must be open to public debate. The objective of Islamic law is to ensure that justice is done and the public interest is served, and this can only be achieved through consultations and taking into consideration different points of view.