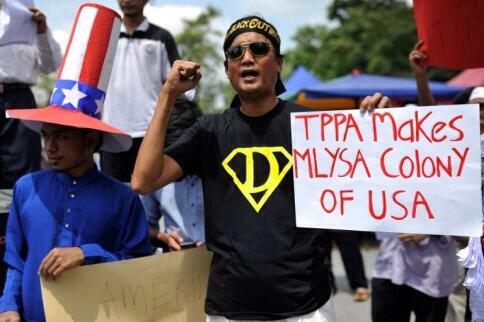 A paper by a UN senior economist indicates that the loss in the country’s trade balance could be more than RM5bn per annum, observes Nizam Mahshar.

A new paper by a United Nations senior economist working has shown damning evidence that Malaysia joining the Trans Pacific Partnership Agreement (TPPA) will not be overtly beneficial for domestic value-added trade and may in fact prove detrimental to certain industries.

In her report, Rashmi Banga of the Unit of Economic Cooperation and Integration among Developing Countries (ECIDC) says that Malaysia will have an unfavourable balance of trade (BOT, defined as exports minus imports) of negative US$300m per annum, roughly RM900m per annum specifically to the United States.

This means that while our government insists that the TPPA is an agreement where the “benefits outweigh costs” and is quoted telling the media such, it is a half-truth.

According to the paper, if Malaysia joins the TPPA, its exports will increase to the other TPPA countries, but its imports from them will increase by even more, and thus the country will have a net loss in its trade balance. The trade balance (or BOT) is the difference between the value of exports and imports of goods.

In 2013, Malaysia exported US$93.7bn of goods to the other 11 TPPA countries, and imported US$73.9bn of goods. Malaysia thus enjoyed a surplus in its trade balance with the 11 countries of US$19.8bn.

This means that Malaysia will not have no net gains from the increased trade resulting from the TPPA. As imports will rise faster than exports, Malaysia will suffer a net loss in its trade balance. The loss is significant, i.e. US$1.465bn or RM4.79bn per annum (at the exchange rate as at 17 October of US1 = RM3.27).

This worsening of Malaysia’s balance of trade may even be more than the paper’s conclusion because the paper assumes that Malaysia will be able to export more textiles and clothing to the United States, at zero tariffs and without any other impediment.

Thus the estimated increase in Malaysian exports of textiles and apparel items to the United States by about RM454m (US$139m) may exaggerate the gains for Malaysia. If the increase of textiles exports is less than this RM454m, then the loss in trade balance for Malaysia will be more than RM4.79bn per annum.

The loss could be even more than RM5bn per annum.

While it is true that this amount may be small, but it has a higher impact on Malaysians as a whole in terms of employment.

In addition to this, Rashmi adds that if the TPPA is signed, Malaysia will be seeing an increase in imports of as high as 61 per cent of electrical machinery from the United States and an increase of as much as 97 per cent in the import of vehicles and 90 per cent in iron and steel from Japan.

All these industries are existent in Malaysia and would face direct competition – our steel industry, electrical machinery and the automotive sector. We all know that these sectors employ tens of thousands of local Malaysians, are ailing, very dependent on government funds and policies, and now have to compete on a global level.

The economist says that our business services gross exports – which Prime Minister Datuk Seri Najib Tun Razak said was getting support for further growth in Budget 2015 – only contributes a domestic value-added (DVA) export by only 3.8 per cent.

In addition to this negative balance of domestic value-added trade which is tangible, there are also intangible negatives in terms of intellectual property rights, which will affect the price of medicines, and the investor state dispute settlements, proving that this agreement is not beneficial to Malaysia from any perspective whatsoever.

So, yet again, our Prime Minister is painting us a rosy picture that is factually untrue. Bantah TPPA calls on the Minister of International Trade and Industry, Datuk Seri Mustapa Mohamed, and Najib to clarify their stance.

Where are these facts that talk about “benefits outweigh costs” on the TPPA? Where is the cost-benefit analysis report that has been pending since May 2014?

Until all these questions are answered and facts, figures and direct engagement to debate this agreement is made available to civil society and stakeholders, Bantah TPPA will continue to call on everyone to protest against this deal.

It is not beneficial to us, and we have economists from the United Nations such as Rashmi, Nobel Peace Prize winners such as Joseph Stiglitz and even local economists here who say that the agreement is a bad idea.

In fact, we even had Jean Pierre Lehmann from the International Institute of Management Studies based in Switzerland (which offers the world’s best MBA programme) tell the Global Economic Symposium (GES) that it was a “stupid idea”.

So we ask our government to clarify who are these brilliant people who say otherwise.

Nizam Mahshar is the chairperson of Bantah TPPA