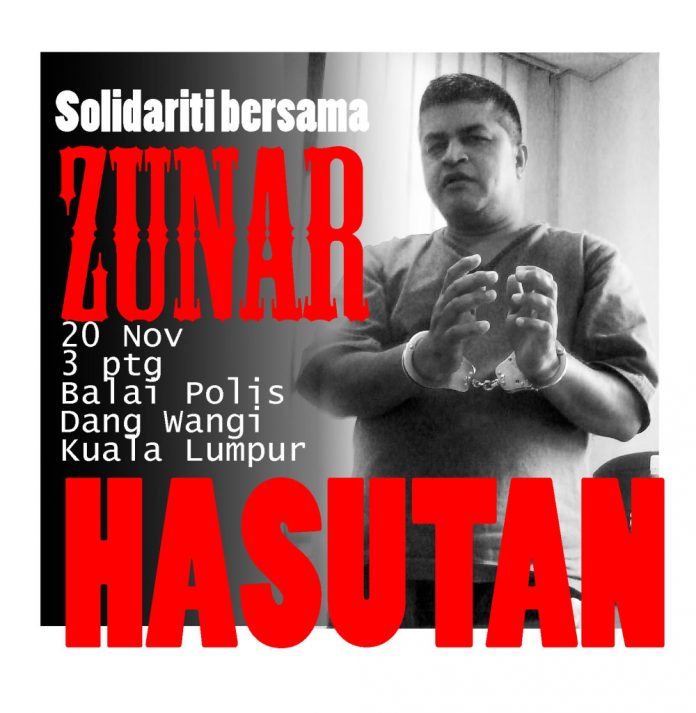 Zunar shares what happened today during his interrogation by police, who are probing him for possible offences under three different laws.

Today, I was questioned for about 45 minutes by the police regarding my new cartoon book Komplot Penjarakan Anwar (Plot to Jail Anwar) at the Dang Wangi Police Station in Kuala Lumpur.

I was investigated under the Classified Crime Section involving three different laws. The laws are:

Two separate police reports were made against me in two different police stations regarding the production of the book. Throughout the investigation session, I refused to answer to any of the 27 questions asked by the police.

In the latest development, the police have asked the online payment gateway that handles my book transactions to disclose the list of customers who have purchased my books through my official website, zunar.my. In the email that was sent by MOLPay Sdn Bhd to me, it stated that they received a formal letter from the police to disclose the list of customers.

“Police have sent a formal request for MOLPay Sdn Bhd to provide the online payment receipts of customers who have purchased the said book via your website www.zunar.my in which MOLPay has no choice but to furnish them with the requested details,” the email from MOLPay stated.

Last week, three of my assistants were detained for five hours for selling my books. Several days after that, my webmaster was also summoned by the police to give statements.

For the longest time, Zunar has been targeted by the police and the Home Ministry for producing cartoons that were purported to be detrimental to public order. More than 400 copies of his books were confiscated and five of his books titled Perak Darul Kartun, 1 Funny Malaysia, Isu Dalam Kartun, Vol. 1, 2 and 3 were banned by the Home Minister from 2009 to 2010.

The government’s determination to persecute Zunar was extended to printers, vendors and bookstores around the country. Their places were raided and they were warned not to print and carry any of Zunar’s books in future.

In 2011, Zunar was conferred the Courage in Editorial Cartooning Award by the Cartoonist Rights Network International, a cartoonists’ rights NGO based in Washington, USA. In October 2014, one of Zunar’s books Pirate of the Carry-BN was accepted into the Library of Congress in Washington.