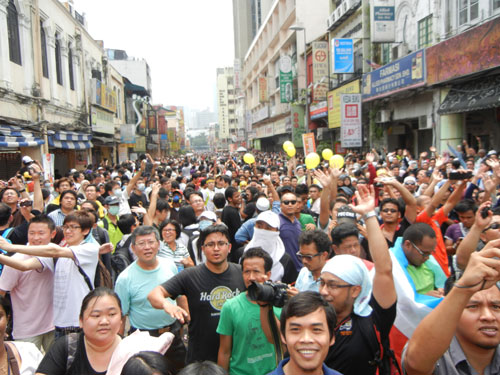 The Malaysian Bar abhors the decision of the police, reported in the media earlier this week, to “disallow” the Bersih 4 rally scheduled to be held in Kuala Lumpur on 29-30 August 2015.

The constitutional right to assemble peaceably and without arms is guaranteed by Article 10(1)(b) of the Federal Constitution, subject to the limited restrictions under Article 10(2)(b). Such a restriction was previously found in Section 27 of the Police Act 1967, whereby a licence from the police was required for an assembly.

However, Section 27 was repealed in 2012, and the Peaceful Assembly Act 2012 was enacted, which came into force on 23 April 2012. Thus, the requirement to obtain a licence from the police under the Police Act 1967 no longer exists.

Thus, the police have no power under the PAA to prohibit a rally. The decision of the police to “disallow” the Bersih 4 rally is therefore contrary to the PAA and legally flawed.

Recently, the Court of Appeal in the case of Nik Nazmi Nik Ahmad v Public Prosecutor [2014] 4 CLJ 944 dealt with the PAA, and unanimously affirmed the constitutional liberty to assemble peaceably — as enshrined in Article 10(1)(b) of the Federal Constitution — as a fundamental right of all Malaysians. The Court of Appeal decided that the failure to give notice of an intended assembly will not be subject to criminal sanction under the PAA.

READ MORE:  Constitutional freedom of speech, assembly and association must be upheld

In this regard, the Deputy Inspector General of Police, Noor Rashid Ibrahim, had reportedly initially said that the police would not object to the rally, that “the public has the right to gather, has the right to voice out their dissatisfaction” and that “the right to assembly is allowed under the Federal Constitution”. The reversal of this decision now is perplexing and untenable.

The police must respect and facilitate the constitutionally guaranteed right to assemble peaceably and without arms. This is a duty imposed by law on the police and it is not a question of their “tolerance” of the exercise of the constitutional right by citizens.

The police should also learn from their past mistakes in mishandling and deterring public assemblies. The Human Rights Commission of Malaysia, Suhakam, in its Report of the Public Inquiry into the Incidents During and After the Public Assembly of 28 April 2012 found:

It is appalling that the police have yet to take any action against the group of approximately 30 persons who reportedly committed acts of intimidation and harassment directed at the organiser of the Bersih 4 rally, on 20 August 2015.

It was reported that they poured red liquid onto a life-sized cardboard cutout of Maria Chin Abdullah, the chairperson of Bersih 2.0, stomped on it and threw it in a rubbish bin. The spokesperson of the group also announced his intention to gather 6,000 to 7,000 persons to open up stalls in front of her home.

Such conduct is offensive and must not be condoned by the police.

The Malaysian Bar is also revolted by statements — attributed to the Federal Territories Minister Tengku Adnan Tengku Mansor — which were directed at Bersih 4 rally participants. The Minister had reportedly said, “If they want to, they can go to any stadium they want . . . Do whatever, you want to shout, want to be naked, do whatever you like.”

This callous remark by a Minister displays a shocking level of ignorance of and blatant disrespect for the constitutional rights of Malaysians.

The Malaysian Bar strongly urges the police and the authorities to respect the constitutional right of citizens to assemble and to allow the Bersih 4 rally to proceed unhindered. If the police cooperate with the organiser, facilitate the rally, and employ restraint in the exercise of their powers, a peaceful and incident-free assembly can be held on 29-30 August 2015 in the true spirit of Merdeka.