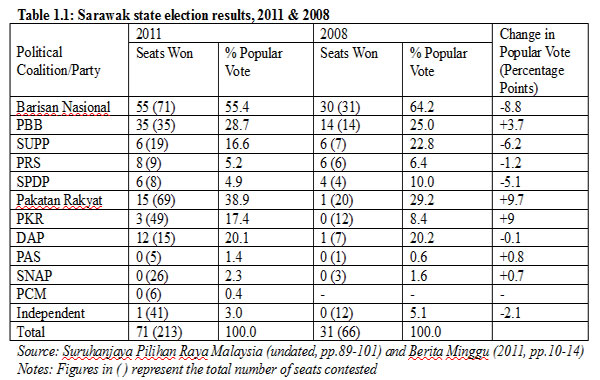 Rise of Sarawak Efforts (Rose), a group of concerned citizens, is unhappy with the unequalised constituencies proposed by the Suruhanjaya Pilihan Raya (SPR) in its recent electoral delineation and delimitation exercise.

After detailed analysis of the SPR proposals to increase Sarawak’s state constituency (Dun) seats by 11 constituencies (from 71 to 82), ROSE believes that the SPR has failed to comply with its constitutional obligations as defined by Section 2 (c), Part 1 of the Thirteenth Schedule to the Federal Constitution which states:

the number of electors within each constituency in a State ought to be approximately equal except that having regard to the greater difficulty of reaching electors in the country districts and the other disadvantages facing rural constituencies, a measure of weightage for area ought to be given to such constituencies

Although duty-bound to adhere to this key principle, the SPR has not done so for reasons unknown. To date, despite repeated requests by political parties and interested civil society groups, the SPR has NOT provided voters and the general public with any rationale as to how it arrived at its proposals.

Furthermore, blatant discrepancies like Padungan (N9 – 22,873 voters) and Satok (N8 – 13,580 voters), which are urban Dun seats in Kuching city situated just next to each other, were not redrawn for reasons only known to the SPR.

The entrenched democratic principle of ‘one vote, one value’ has been further eroded. If based on 82 Dun seats and 31 parliamentary seats and the number of voters on SPR’s electoral roll of 30 April 2014, the average number of voters for each Dun is 13,526 while for Parliament it is 35,778. To ensure compliance to the above constitutional principle and to ensure each voter has a vote of equal value, the number of voters in each DUN seat thus should not deviate too far from this Electoral Quotient (EQ).

SPR’s proposals hence do not improve the variations from the average but instead have worsened them. Instead of enhancing democracy by equalising the value of votes, the SPR has undermined democracy by unfairly redrawing constituency boundaries. The SPR’s proposals are thus defective, unfair and undemocratic.

Together with Tindak Malaysia, Rose wishes to propose a better alternative proposal that comes in the form of an ‘Equalised Sarawak’ map with 82 state constituencies and 31 parliamentary constituencies. This “Equalised Sarawak” map was made possible through the use of open-source geographical information systems software called QGIS.

The new boundaries generated by Tindak and ROSE better fulfil the constitutional principle of Section 2 (c), Part 1 of the Thirteenth Schedule to the Federal Constitution.

READ MORE:  A privilege to have travelled with you, Khay Jin

What is glaringly obvious from the series of constituency maps that Rose (together with Tindak) have generated is that it achieves a far lesser degree of variation from the average number of voters in each Dun compared to the SPR proposals. Graphs and maps showing the variations for every Dun and Parliamentary seats can be viewed at this website: http://sarawakrose.org/

The SPR had previously stated that it employed a similar geographical system to come up with its proposals called the ‘Election Geographical Information System’ (EGIS). Why then did the variation from EQ increase in their 2015 proposal instead of decrease? Why are the SPR’s 2015 proposals so unequal?

Meanwhile, Rose urges all registered voters who are unhappy with the SPR constituency delineation proposals to urgently mobilise groups of 100 or more persons within their constituency to object to these unfair SPR proposals.

We urge voters to lodge their objections by 4 February 2015 to the SPR’s office in Kuching. A sample copy of the Objection Form (Borang Bantahan) is available on our website. If voters have inquiries or need further assistance with drafting their objections, they may contact the Rose team via email at: [email protected]