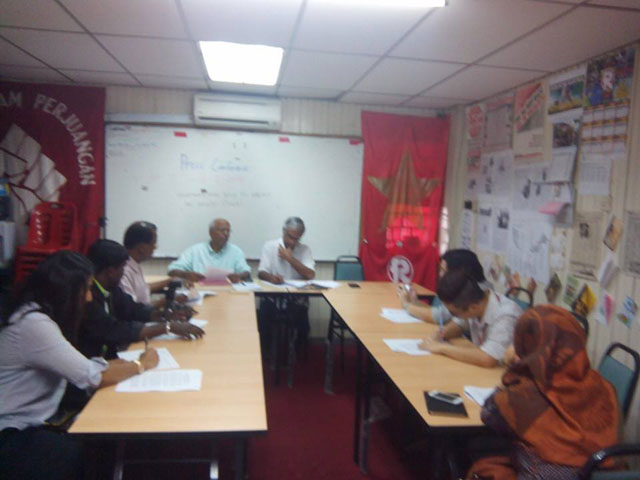 Why can’t our authorities see that it is the money collected as levies that is subsidising the treatment of foreigners coming to government hospitals, ask 14 civil society groups.


We, the undersigned groups, are shocked to learn of the Circular (17)dlm.KKM-58/300/1-5 that was released by the Deputy Secretary General of the Ministry of Health on 29 December 2014.

Section 5 of the Guidelines for the Implementation of Fees for Foreigners specifies that the deposit for foreigners requiring admission to the Third Class Ward in government hospitals is RM600 for medical cases and RM1200 for surgical and obstetric cases. This is a huge sum of money for foreign workers and refugees and has already resulted in serious injustices.

A two-month-old Rohinya baby with parents claiming refugee status was brought to Jerteh Hospital in Trengganu with burns due to scalding by hot water. The A&E doctor wanted to admit the baby, but was not able to do so as the parents could not pay the deposit. The parents took the baby home and brought her to the OPD the next morning when they again faced the same problem. Only in the afternoon was the baby admitted – almost 24 hours after first coming to hospital.

The Jerteh doctors referred the baby to Kuala Trengganu General Hospital (KT GH) for specialist care, but admission to KT GH was denied because the parents could not pay the deposit required. The parents have taken the child back home!

In the Penang General Hospital, a pregnant Rohinya lady was initially denied admission despite the fact her husband held a UNHCR card attesting to his refugee status, as she could not pay the deposit. As her baby had Fetal Distress Syndrome, the Penang GH doctors insisted on admission and broke the new fee protocol so that they could do an emergency caesarian section to save the baby.

In another government hospital, a foreign worker who sustained a fracture of his femur due to a fall at work was denied admission because he could not pay up the RM1,200 required for admission to the Orthopedic ward.

A person with a fractured femur can lose up to one litre of blood due to bleeding from the fracture site.In addition, he might have other undiagnosed internal injuries. Sending him home on an external splint is not good management. But keeping him in the Emergency Ward till his deposit issue is resolved just makes the already crowded situation in our A&E Departments even more chaotic!

The level of incompetence on the part of senior Ministry of Health officials and the lack of policy coherence of the Federal Administration is mind-boggling! Malaysia has just assumed the position of Chair of Asean. Malaysia has recently been nominated to serve in the UN Security Council as one of the non-permanent members.

We are trying to promote the image of Malaysia in the international arena. Yet the Ministry of Health has rolled out a policy that denies even emergency care to refugees and foreign workers.

We would like to ask the Minister of Health, did you approve this new fee policy? Was it discussed with the Malaysian Foreign Ministry? Does the Cabinet know about it? Or have you been too distracted by other issues to provide leadership to the Health Ministry?

Apart from being grossly unfair to migrant workers and refugees and sullying the image of Malaysia in the international arena, this new fee policy is also detrimental to the health of ordinary Malaysians – for the high costs will deter foreigners from seeking medical attention. They will try to self-medicate themselves. This delay in diagnosis and proper treatment could lead to the transmission of infectious diseases such as tuberculosis, typhoid, dengue and a whole host of others.

At that point, no one would know whether it is a smoker’s cough, asthma, a viral infection or tuberculosis. Under the current fee schedule, he would be required to pay registration fees of RM23 at the out-patient department, RM36 for blood tests (Full Blood Count and ESR), RM57 for sputum tests and RM33 for a chest xray. A total of RM149 before a diagnosis is made – quite a big sum for a worker earning about RM1,000 a month. Sometimes it requires another set of sputum tests to clinch the diagnosis.

The costs associated are definitely going to delay the diagnosis. In the meantime, he is going to continue coughing and spewing out tuberculosis bacilli in his place of work, in his hostel, in buses and in pasar malams. Malaysians too will be exposed to the risks of contracting tuberculosis from him.

We have heard from reliable sources that a refugee patient who was diagnosed by the HKL Emergency Department as having dengue was refused admission because the Billing Department of HKL decreed that he had to have a letter from the District Health Office attesting that he had an infectious disease before he could be exempted from paying the deposit. Another foreigner with dengue was turned away in Penang GH for the same reason.

A&E doctors are an over-worked lot! Most would not have the appetite to take on a Byzantine bureaucratic apparatus to seek to override the decisions of the Admissions Counter. So even patients with diagnosed infectious illnesses have been sent home to share their germs with the rest of us.

This is incomprehensible to us. So many of the doctors serving as Directors in the Ministry of Health hold public health degrees and even PhDs. Did they agree with this fee policy that is modelled more along the lines of an “Ah Long” debt collecting outfit rather than on any principles of public health? Or were they not even consulted? A public health approach would prioritise the prevention of transmission of infectious diseases. All this certainly creates the impression of a highly dysfunctional ministry!

Our Immigration Department collects more than RM2bn as levies from foreign workers every year. This sum is far more than the expenditure of the Ministry of Home Affairs for handling foreign workers. The remainder of the RM2bn levy collected would be more than enough to meet the treatment costs of foreign workers, who for the most part, are healthy adults between the ages of 20 and 50 years.

Why can’t our authorities see that it is the money collected as levies that is subsidising the treatment of foreigners coming to government hospitals?

Malaysia is proud to be a member of the OIC. There are voices both in government and without who are trying to infuse ‘Islamic values’ into our administration. Isn’t provision of health care to marginalised groups such as refugees and foreign workers seeking emergency treatment ‘Islamic’?

Solidarity with the poor and marginalised is a teaching that is central in all the religions practised in Malaysia. This injunction to show compassion to those in need is clearly violated by this new fee policy by the Ministry of Health.

We would like to remind the federal government that the people have elected you to office to administer the country justly and competently. Please act in a way that augments the dignity of our nation and makes us proud to be Malaysians.

A first step in that direction would be to call for an immediate moratorium on the new fee structure for foreigners and open the issue for discussion with public health experts and other competent parties.