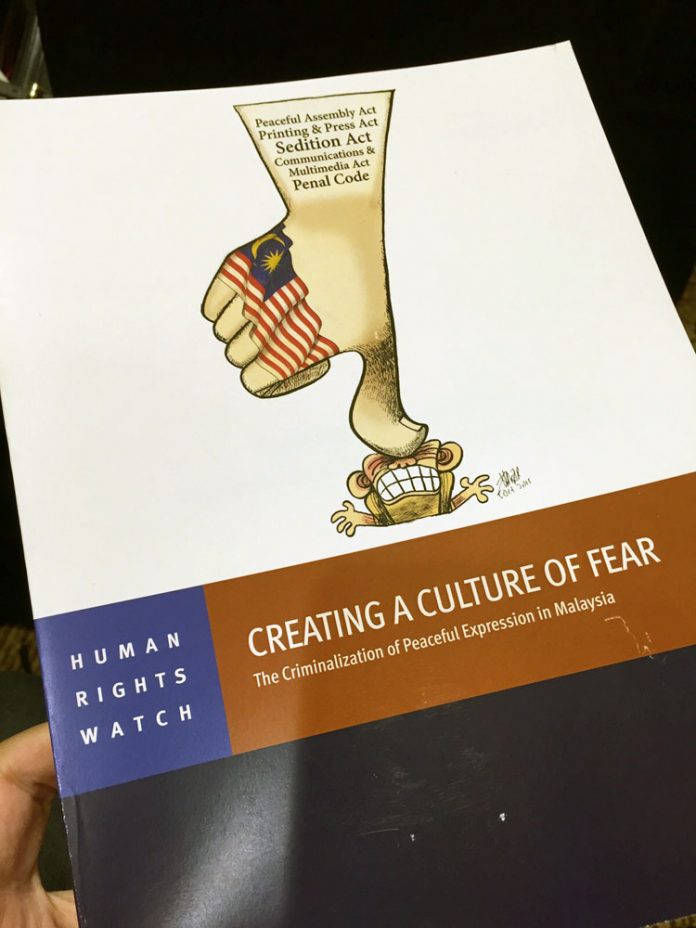 The space for public debate and free speech in Malaysia is rapidly narrowing, as the government resorts to criminal laws to silence its critics and quell public discontent, Human Rights Watch said in a report released today.

United States President Barack Obama and other world leaders will gather in Kuala Lumpur, on 18 November 2015, an opportunity to press for reform of the draconian laws and an end to censorship.

“Prime Minister Najib Razak and the Malaysian government have repeatedly broken promises to revise laws that criminalise peaceful expression. Instead, Malaysia has gone on a binge of prosecutions of critics,” said Brad Adams, Asia director at Human Rights Watch. “The government is making a mockery of its claims to democracy and fundamental rights by treating criticism as a crime.”

The 141-page report, Creating a Culture of Fear: The Criminalisation of Peaceful Expression in Malaysia, documents the government’s use and abuse of a range of broad and vaguely worded laws to criminalise peaceful expression, including debates on matters of public interest.

The report also spotlights a disturbing trend of abuse of the legal process, including late night arrests and unjustifiable remands, and a pattern of selective prosecution.

The report is based on an in-depth analysis of laws such as the Sedition Act, the Printing Presses and Publications Act, the Communications and Multimedia Act, the Peaceful Assembly Act, and various provisions of the penal code.

Human Rights Watch wrote to the Malaysian minister for home affairs, the attorney general, the inspector general of police and the chairman of the Malaysian Communications and Multimedia Commission requesting their views on the issues raised in the report; none of them responded.

When Prime Minister Najib Razak took office in April 2009, he pledged to “uphold civil liberties” and “regard for the fundamental rights of the people.” After the ruling coalition lost the popular vote in the 2013 elections, however, a crackdown on its critics began.

That repression has intensified in the past year in the face of critical media coverage and rising public discontent over issues ranging from the imposition of a new goods and services tax, to the government’s response to a spiralling corruption scandal involving the government-owned 1Malaysia Development Berhad (1MDB), whose board of advisors is chaired by Prime Minister Najib.

Rather than engage in debate on the merits of these issues, the government has responded by arresting and often prosecuting those with critical views, including opposition politicians, activists, journalists, and ordinary citizens; suspending two critical newspapers for three months; blocking websites; and declaring peaceful protests “unlawful”.

The government has been aided in these repressive actions by the existence of broad and vaguely worded laws that permit the imposition of criminal penalties for peaceful expression in a manner inconsistent with international legal standards for protection of those rights.

“Malaysia should stop shutting down media and shutting up critics,” said Adams. “These actions are increasingly noticed by the international community, and send the signal that the rule of law is under threat.”

Among the many troubling cases Human Rights Watch documents is University of Malaya law professor Azmi Sharom, who is facing trial on charges of sedition for expressing his legal opinion that actions taken by the government in Perak more than six years ago were illegal. Dr Sharom was surprised what he said could be considered seditious, noting that, “I was a law professor expressing a legal opinion.”

The country’s highest court, the Malaysian Federal Court, rejected Dr. Sharom’s constitutional challenge to the Sedition Act two weeks ago, finding the law consistent with the Malaysian constitution’s provisions on freedom of speech, so his case will now proceed to trial.

One of Asia’s best-known political cartoonists is Zulkiflee Anwar Ulhaque – commonly known by his pen name Zunar. His cartoons and cartoon books cover current political issues ranging from corruption to police abuse, and he has long been a target of government harassment.

Zunar faces trial on nine counts of sedition, one for each of nine tweets he sent criticising the Malaysian Federal Court decision to uphold the sodomy conviction of former Deputy Prime Minister Anwar Ibrahim.

The Malaysian authorities have used multiple laws to ban and seize hundreds of copies of his cartoon books, threaten printers who printed his books with loss of their publishing license, and investigate not only Zunar but those who work for him. If convicted on all counts, he faces up to 43 years in prison.

Maria Chin Abdullah, chair of the Coalition for Free and Fair Elections (Bersih 2.0), has been charged with participating in an illegal “street protest” in February, when she attended one of a series of rallies protesting the Federal Court decision in the Anwar Ibrahim case.

The charges were filed a week after Bersih held a peaceful, well-attended, 34-hour rally calling for institutional reforms to combat corruption and for Prime Minister Najib to explain his handling of 1MDB or resign.

The government branded the rally “illegal”, banned the Bersih logo and the official yellow Bersih T-shirts, and called Abdullah and six others involved in organising the rally in for questioning for alleged “activity detrimental to parliamentary democracy,” in violation of section 124 of the penal code – a law that carries a penalty of up to 20 years in jail.

Human Rights Watch called on the Malaysian government to drop all pending charges in such cases, along with abusive investigations and prosecutions for critical speech and participation in peaceful assemblies.

Malaysia should halt the abuse of the legal process to harass and detain critics, and amend or repeal the laws that impose criminal penalties for speech or assembly to bring those laws into line with international standards.

“Back in March 2014, the Malaysian government told the United Nations Human Rights Council that it was committed to taking steps to improve compliance with international human rights standards,” said Adams. “To be taken seriously as a rights-respecting member of the international community, it must honour that pledge and stop the ongoing criminalisation of dissenting or critical views.”