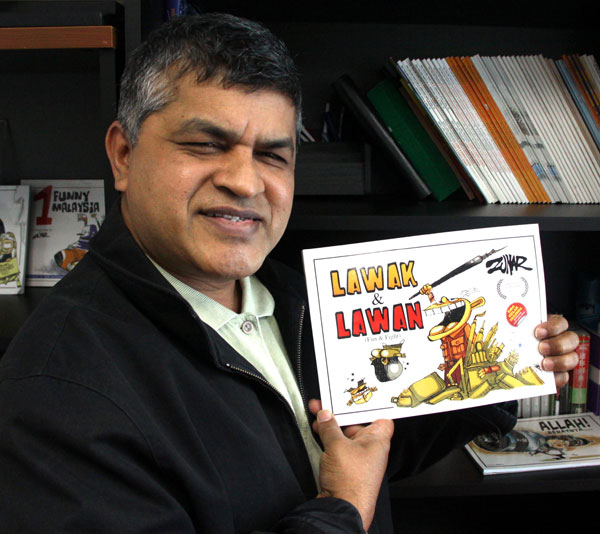 Malaysian cartoonist Zulkiflee Anwar Ulhaque, also known as Zunar, was charged in court on 3 April with nine counts of sedition for critical tweets he wrote in February about a politically sensitive court decision, according to news reports.

The Committee to Protect Journalists calls on Malaysian authorities to drop the charges and to cease using the Sedition Act to intimidate and threaten journalists.

Sessions Court Judge Zanol Rashid Hussain agreed to hear the state prosecution’s case against Zunar over nine tweets he made on 10 February criticising a Federal Court decision to jail the country’s main opposition leader, Anwar Ibrahim, on sodomy charges, reports said. The trial is scheduled to begin on 20 May.

Zunar’s tweets included a cartoon portraying Prime Minister Najib Razak as the presiding judge in the case against Anwar and text suggesting that the verdict was politically motivated, news reports said. Zunar was detained for three days in February while police carried out an investigation into the accusations.

Latheefa Koya, Zunar’s lawyer, told reporters that the cartoonist faced up to 43 years in prison if found guilty on all nine counts of sedition, according to news reports. Sedition is punishable by three years in prison under Malaysian law, but convictions on multiple counts allow for longer jail terms, according to reports.

Zunar was freed on 22,500 ringgit bail, reports said. After he was released, Zunar tweeted a cartoon self-portrait in chains but still drawing with his mouth, reports said.

“The notion that a cartoon could be judged a criminal offense is ridiculous,” said Shawn Crispin, CPJ’s senior Southeast Asia representative. “Prime Minister Najib Razak’s government should drop these baseless charges against Zunar and stop harassing all journalists who criticise his beleaguered administration.”

Najib’s government is increasingly using the threat of sedition charges to silence journalists, CPJ research shows. Earlier this week, police detained three editors and two executives of The Malaysian Insider news portal on accusations of sedition in connection with a report on the proposed introduction of hudud, or punishments meted out under Islamic law, in the country’s northern Kelantan state. They were released without charge, according to news reports.

On 28 January, police raided Zunar’s Kuala Lumpur-based office and seized more than 100 copies of two of his cartoon books, including a volume entitled Conspiracy to Imprison Anwar, on accusations that their political content violated the Printing Presses and Publications Act, the Sedition Act, and the penal code. The status of those criminal investigations is unclear.

Zunar was arrested in September 2010, hours ahead of the scheduled launch of a book of his political cartoons, Cartoon-o-phobia. He is still under police investigation on charges of sedition filed against him that year, according to news reports.