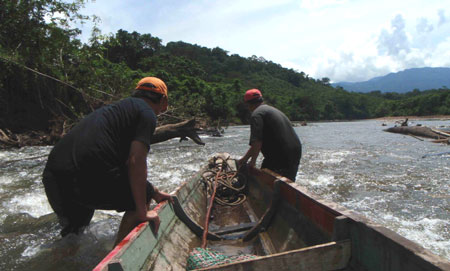 The initiative will take a two-prong approach to sustainable rural development of the Baram region, reports Save Rivers.

Following the cancellation of the Baram Dam, the communities of Baram are proud to announce the launch of the Baram Conservation Initiative.

The Baram Conservation Initiative is a community-driven effort that intends to protect the rainforest, establish sustainable livelihood systems, and prevent the expansion of large-scale commercial agriculture and extractive industries in the region.

The initiative will take a two-prong approach to sustainable rural development of the Baram region. Firstly, through securing land and territories for indigenous communities and secondly in designing alternative development models that are community-centred.

Secure land tenure is crucial in the conservation of the forestland and the preservation of indigenous cultural heritage. Addressing the importance of community participation in development, Peter Kallang of Save Rivers says, “We stress the need for the inclusion of Free Prior Informed Consent of affected local communities in any development plan. This is in accordance to the UN Declaration of Human Rights.”

Alternative rural electrification options including micro-hydro and solar are currently being explored in middle Baram where communities have been actively resisting the Baram Dam.

“The people need to determine what type of development they want. In our kampong we built a micro-hydro and solar system. This is the kind of energy that should be implemented, not only in our kampong but also in other places in Baram, where it does not make any destruction for the people,” says James Nyurang of Lepo Gah, Tanjung Tepalit, a Kenyah village in Middle Baram.

In addition, the initiative is supporting efforts to protect 280,000 hectares of forest land through the Taman Damai Baram (Baram Peace Park) in Upper Baram. The proposal for the Taman Damai Baram has been well received so far by both grassroots communities and government agencies including the Sarawak Forest Department.

“We, the communities of upper Baram are very keen on realising the Taman Damai Baram and hope that the government will join our efforts to protect our forests and develop alternative income sources,” says Nick Kelesau, a Penan from Long Kerong and member of the Keruan Association. In line with the government’s commitment to conservation and community, the Taman Damai Baram will be jointly managed by the communities of Upper Baram in collaboration with the public sector.

One of the many forums that the initiative is organising to raise awareness and consult the community is the Save Rivers five-year anniversary conference with the theme “Development without Destruction” on 22 October 2016 at the Grand Palace Hotel in Miri, Sarawak.

The Baram Conservation Initiative is facilitated by the Save Rivers Network, the Keruan Organisation, The Borneo Project, and the Bruno Manser Fund.