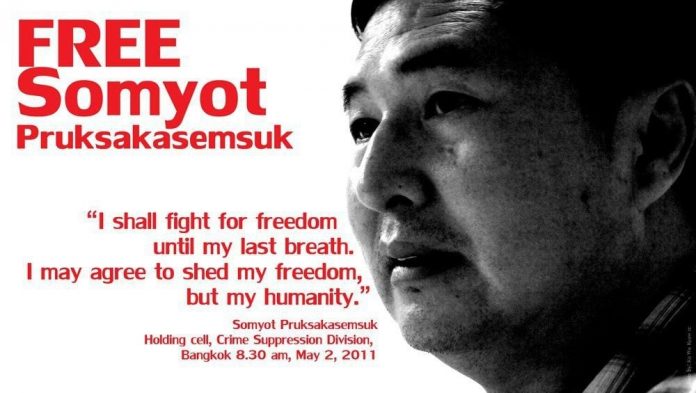 Thai authorities must immediately and unconditionally release human rights defender Somyot Prueksakasemsuk, the Observatory for the Protection of Human Rights Defenders (an FIDH-OMCT partnership) has reiterated.

Having spent 2,000 days behind bars, Somyot, 55, is currently the longest-serving lèse-majesté detainee. Somyot remains incarcerated in Bangkok Remand Prison, where he is serving a 10-year sentence following his conviction on charges of lèse-majesté under Article 112 of Thailand’s Criminal Code. Article 112 states that “whoever defames, insults or threatens the King, the Queen, the Heir to the throne or the Regent shall be punished with imprisonment of three to 15 years.”

Somyot is also serving an additional year in prison as a result of an earlier sentence for defamation in connection with another case.

“Somyot has been detained for more than five years only for exercising his legitimate right to freedom of expression. Thai authorities should free him immediately and stop using restrictive legislation, including Article 112, that is inconsistent with international human rights standards”, said OMCT Secretary General Gerald Staberock.

The Observatory condemns the flaws and delays in the judicial proceedings against Somyot, and the courts’ repeated refusals to grant him bail. Somyot unsuccessfully petitioned for bail 16 times – the last time being in November 2014 – and has been waiting 700 days for a Supreme Court hearing.

Several UN human rights monitoring bodies have voiced concern over Somyot’s deprivation of liberty. In an opinion issued on 30 August 2012, the UN Working Group on Arbitrary Detention (WGAD) affirmed that Somyot’s detention was arbitrary, and called on Thai authorities to release Somyot and award him adequate compensation.

A former labour rights activist and magazine editor, Somyot was arrested on 30 April 2011, five days after he launched a petition campaign to collect 10,000 signatures required for a parliamentary review of Article 112.

On 23 January 2013, the Bangkok Criminal Court sentenced him to 10 years in prison on two counts of lèse-majesté. Somyot was convicted for allowing the publication of two satirical articles in the now-defunct magazine Voice of Taksin, of which he was the editor. The articles were authored by someone else and deemed by the Thai authorities to have insulted the late King Bhumibol Adulyadej.

On 19 September 2014, the Court of Appeals upheld the Bangkok Criminal Court’s lèse-majesté conviction of Somyot. The Court of Appeals failed to notify Somyot, his lawyer, and his family members that the hearing would take place on that day.

On 23 September 2014, the UN Office of the High Commissioner for Human Rights (OHCHR) voiced its disappointment over the Court of Appeals’ ruling that upheld Somyot’s conviction.

On 19 November 2014, Somyot filed an appeal to the Supreme Court against his conviction.

Somyot’s conviction and his detention do not comply with Thailand’s international legal obligations. Article 19 of the International Covenant on Civil and Political Rights (ICCPR), to which Thailand is a state party, provides that everyone has the right to freedom of expression. This right includes the “freedom to seek, receive, and impart information and ideas of all kinds.”

In its General Comment on Article 19, the UN Human Rights Committee (CCPR), the body that monitors state parties’ compliance with the provisions of the ICCPR, affirmed that, “all public figures, including those exercising the highest political authority such as heads of state and government, are legitimately subject to criticism and political opposition.”

The CCPR specifically expressed concern regarding lèse-majesté laws and stated that “imprisonment is never an appropriate penalty” for defamation.

On 11 August 2015, OHCHR urged Thailand to amend the “vague and broad” lèse-majesté law to bring it in line with international human rights standards. OHCHR also called for the immediate release of all those who had been jailed for the exercise of their right to freedom of expression.

The Observatory for the Protection of Human Rights Defenders (the Observatory) was created in 1997 by the World Organisation Against Torture (OMCT) and FIDH. The objective of this programme is to intervene to prevent or remedy situations of repression against human rights defenders. OMCT and FIDH are both members of ProtectDefenders.eu, the European Union Human Rights Defenders Mechanism implemented by international civil society.