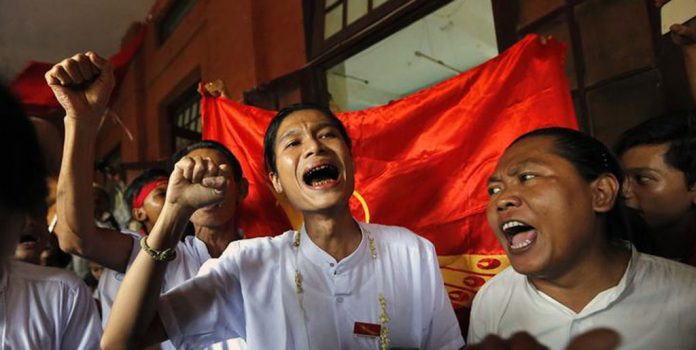 The new Burmese government, led by the National League for Democracy (NLD), has taken a major step in releasing about 200 political prisoners and detainees.

It has also pledged to release remaining political prisoners or have their politically motivated charges dropped by the end of April 2016.

The NLD-led government should also use its absolute majorities in both houses of parliament to repeal or amend the many rights-abusing laws that have been used to prosecute dissidents and others during a half-century of mostly military rule.

“The new NLD-led government’s release of large numbers of political prisoners has been welcomed in Burma and around the world, but there are hundreds more still in prison or facing charges,” said Brad Adams, Asia director at Human Rights Watch. “The NLD has correctly made releasing political prisoners a priority and should now follow through to ensure that all remaining activists are freed and that charges dropped against hundreds of others.”

Political prisoner groups estimate that 121 political activists remain in prison and another 320 people are facing charges for political offenses.

On 7 April, NLD leader Aung San Suu Kyi, the newly appointed state counsellor to President Htin Kyaw and the parliament, announced a plan to release political prisoners and activists facing charges for political activities. Under section 204 of the Burmese constitution and section 401 of the Code of Criminal Procedure granting the president power to issue pardons, the government pledged to release all political prisoners, but did not provide a timetable for the promised releases.

More than 2,000 other prisoners whose sentences were almost completed were also released in a general amnesty scheduled before the national Thingyan water festival, which started on the week of 10 April and continued for several days. A statement from Aung San Suu Kyi’s office, late on Friday, 8 April, announced that the process of releases would be delayed over the holiday, but all other political prisoners would be freed or have charges dropped by the end of April.

In a sign of the challenges ahead, on 8 April, a court in Mandalay sentenced two Muslim inter-faith activists to an additional two years in prison with hard labour. Pwint Phyu Latt and Zaw Zaw Latt, already sentenced to two years in prison in 2016, were convicted on charges under the Unlawful Association Act section 17(a) for visits they allegedly made to the Kachin Independence Army in 2012. This follows the two-year hard-labour sentence handed down to the former NLD information officer, Htin Lin Oo, in June 2015, on charges of insulting religion. The NLD-led government should include these activists in the pardon process.

Human Rights Watch called on the government to prioritise the swift repeal or amendment of key laws used by authorities against peaceful activists, such as various sections of the penal code; section 18 of the Peaceful Assembly and Procession Law, under which many students were recently charged; the 1950 Emergency Provisions Act; and section 66(d) of the Telecommunications Law, which has been used to detain activists such as Robert Khum Jarr Lee for alleged social media posts.

Activists have told Human Rights Watch that they worry legal reforms will be hampered by the Burmese military’s continuing control, mandated by the military-drafted constitution, over key ministries. Notably, the ministry of home affairs is headed by an army general appointed by the commander-in-chief, giving the military effective control over the Myanmar police force, the corrections department, and the Special Branch.

“To break the decades-long cycle of politically motivated arrests of peaceful critics of the government and military, Burma’s new government should look systematically at laws long used to stifle basic freedoms.” Adams said. “But until the constitution is amended to put the police fully under civilian control and oversight, the threat of political arrests will remain.”