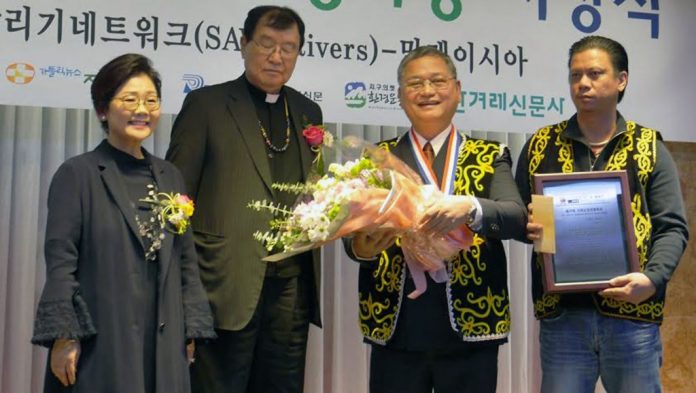 Save Rivers was selected out of eleven civil society organisations from eight different Asian countries as the recipient for the 19th Tji Haksoon Justice and Peace Award 2016; this is the first time that the award goes to Malaysia.

On 10 March 2016, receiving the award in Seoul on behalf of Save Rivers was Peter Kallang, the organisation’s chairman. He was accompanied by Dominic Mathew Usek, a villager from Baram, who is one of those who oppose the proposed Baram hydroelectric dam.

The Sarawak government is planning to build from 12 to 52 hydroelectric dams in the state aimed at fast-tracking the state economy. The dam-building project in Sarawak is a major cause of environmental disaster, which destroys flora and fauna. It is also an industry which will result in the forced displacement of thousands of Sarawak’s indigenous peoples.

Save Rivers, which was formed in October 2011, has been a vigorous movement supporting those who are resisting the government’s proposed hydroelectric dams. Since its formation, the network has been campaigning against the construction of mega dams and giving various kinds of support to those who oppose the projects. They have had commendable success in empowering those affected by the project – which has enabled formidable resistance from those who are directly affected.

The Tji Hasoon Justice and Peace Award is given out annually to deserving individuals or organisations who “at great personal risk, stand up to opposition, in pursuit of justice, peace and respect for human rights”. The 2016 award is the 19th honour being presented since it was formed in 1997.

READ MORE:  Would Abang Johari dare say ...
Support the struggle to build a Malaysia based on Justice, Freedom, Solidarity:

Before Save Rivers from Malaysia, the recipients over the last 19 years were from 13 different Asian countries. The countries range from South Korea itself to Uzbekistan. The foundation is named after a Catholic prelate, the late Bishop Tji Hak Soon, who was an activist and spent most of his life fighting for human rights and social justice and against corruption.

Commending Save Rivers on the award, the chairperson of the accolade, Monsignor Kim Byung-Sang, said, “Save Rivers has demonstrated the full practice of God’s will for the world peace, with small difference in degrees and form.”

Commenting on the award, Peter Kallang said, “This award is a gesture of support and approval and we are really grateful for it. We therefore urge Chief Minister Adenan Satem and the Sarawak government to stop all mega dams and consider alternative energy sources like solar power, biomass and micro hydro. These alternatives would be more people centred and environmentally friendly.”

Save Rivers is a grassroots network of indigenous communities and civil society organisations in Sarawak, working to protect human rights and stop destructive dams in Sarawak.