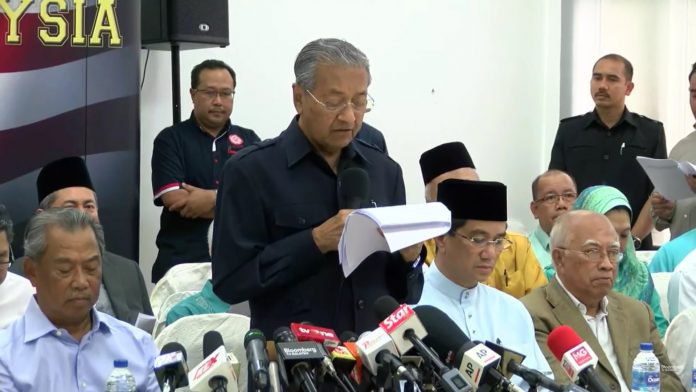 We do not want to see impunity being entrenched in this country through the rehabilitation of “born again democrats” and we expect any future governments to bear this in mind, says Kua Kia Soong.

Once again in Malaysia we have witnessed the announcement of that trite cliché: “there are no permanent enemies in politics”.

History has shown us that this is typically spouted by desperados and drama kings when opportunism raises its ugly head. The latest round in the anti-Najib campaign has seen the unspeakable spectacle of the former Mahafiraun being made the head of the ‘Save Malaysia’ campaign.

The audacity of naivete

To even think that this declaration of intent by this strange collection of bedfellows can depose the evil regime is an exhibition of the utmost naivete and an exercise in futility. Do they really believe the structures set up by Mahathir to make the incumbents in Umno impregnable will just give way, especially when the Umno division chiefs are even more well-fed than before?

The downfall of tyrants and dictators cannot be achieved by declarations alone. History has shown that it can only be achieved by mass direct action involving the ordinary citizens of all ethnic groups. Will Mahathir or any of the other leaders lead this mass movement? Unfortunately, Pakatan Harapan has succeeded in pushing out their former allies Pas who at least provided the Malay masses in past rallies and demonstrations against the Umno/BN regime.

Pakatan Rakyat representatives were elected because of their declared “reformasi” policies. They have just signed a declaration which seems to affirm Umno/BN rule with some minor changes in order to “save Malaysia” (sic).

Presuming Najib is forced to leave the scene, what does this ‘Save Malaysia’ coalition hope for? Mahathir has already declared that his main objective is to “Save Umno/BN”, and releasing Anwar is not even part of the deal!

Does the Pakatan Harapan believe that Mahathir will want to or be allowed to make significant structural changes to the democratic institutions in this country while Umno/BN is still in power?

Do they really think Zahid Hamidi and the others in Umno/BN will accede to these reforms?

Opportunism in its crudest form can be seen when politicians target an individual and not the political regime and political economic system that oppresses, divides and exploits the people. This so-called “Save Malaysia” campaign to only expel Najib but maintain rule of the same racist and exploitative dominant party is nothing short of pure opportunism.

Reforms that do not target the neoliberal economic policies that were set in fast motion by Mahathir in the early 1980s are not serious reforms. Taxes on the rakyat will continue and income disparities will continue to widen while the working class will continue to bear the burden of so-called development.

Najib has merely made more extreme the structures created by Mahathir to entrench the powers of the executive, emasculate the democratic institutions and provide the means for private enrichment of the elite in this country. Racist and racial discriminatory policies were also entrenched by Mahathir in the early 1980s and further manipulated by Najib until today.

No impunity for old miscreants

Apologists for their new saviour, Mahathir, have already started their own “forgiveness” of this former authoritarian prime minister, who had wreaked havoc on ethnic relations, mishandled the economy through corruption, enriched selected elites, detained innocent Malaysians without trial (including the author) and sacked the former Lord President. They have tried to create the delusion that ‘born again democrats’ who denounce the current prime minister can have their record wiped clean!

Who are these politicians to declare which leader can be forgiven for their past crimes against the people of this country? They say that they “do not hate Mahathir… therefore they forgive”.

What’s hate got to do with it?

As Tina Turner reminded us, what’s hate got to do with it? If these politicians know anything about accountability and justice, they will know that the Malaysian people still want to ensure that these former politicians get their just desserts and repay their dues to the rakyat.

Mahathir has to this day not even apologised to all the victims of Operation Lalang or to the former Lord President whom he sacked in 1988 and now, without one shred of evidence of his own transformation, he dares to strut the Malaysian political stage as a “born-again democrat”!

The people must now demand that the Pakatan Harapan leaders come out and say categorically that when they come into office they will re-open the books on all the financial scandals since the 1970s and 1980s that have cost the rakyat billions of ringgit!

According to the social scientist Barry Wain, Mahathir squandered close to RM100bn during his reign as prime minister. The leader of the opposition knows of these scandals more than anyone else in this country.

In human rights, democracy and justice, there is no place for impunity. Impunity means “exemption from punishment or loss or escape from fines”. It refers to the failure to bring perpetrators of human rights violations, rule of law flouters and the corrupt to justice and constitutes a denial of the victims’ right to justice and redress.

We are familiar with impunity, which is especially common in countries that do not respect the rule of law, that suffer from corruption and have entrenched systems of patronage, or where the judiciary is weak and the security forces are protected by the powers that be.

The First principle of the Protection and Promotion of Human Rights through Action to Combat Impunity, submitted to the United Nations Commission on Human Rights on 8 February 2005, states that:

“Impunity arises from a failure by States to meet their obligations to investigate violations; to take appropriate measures in respect of the perpetrators, particularly in the area of justice, by ensuring that those suspected of criminal responsibility are prosecuted, tried and duly punished; to provide victims with effective remedies and to ensure that they receive reparation for the injuries suffered; to ensure the inalienable right to know the truth about violations; and to take other necessary steps to prevent a recurrence of violations.”

Suaram has, since the infamous injustice of Operation Lalang, been in the forefront of the struggle against impunity. We do not want to see impunity being entrenched in this country through the rehabilitation of “born again democrats” and we expect any future governments to bear this in mind. Those who have transgressed against the people must prepare to face the charges on their judgement day here on earth.