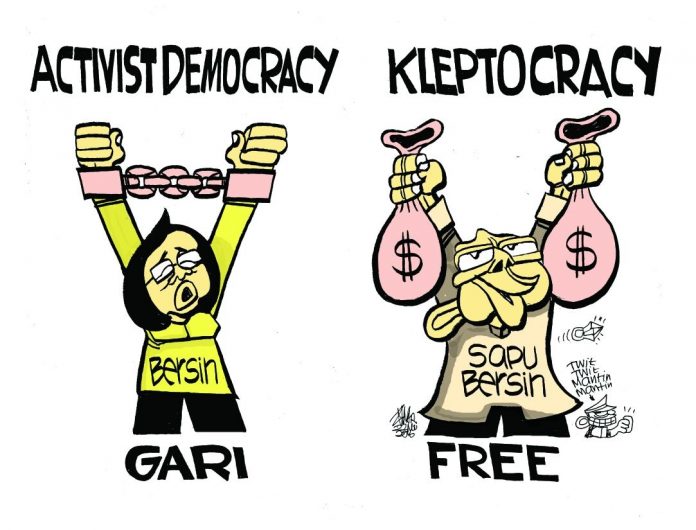 The Malaysian Bar condemns the arrest and detention of Maria Chin Abdullah, the Chairperson of Bersih 2.0, under Section 124C of the Penal Code — for the offence of attempting to commit activity detrimental to parliamentary democracy — because Bersih 2.0 allegedly received funds from the Open Society Foundation.

The arrest was made, and she was detained, on 18 November 2016, which was the eve of the Bersih 5 rally in Kuala Lumpur.

Subsequently, on 19 November 2016, Maria Chin Abdullah was detained under the Security Offences (Special Measures) Act 2012 (Sosma), which allows for preventive detention of up to 28 days for “security offences”. Section 3 of Sosma defines “security offences” to include Part VI of the Penal Code, under which Section 124C falls.

It is startling that the authorities have invoked Sosma against Maria Chin Abdullah in respect of the purported receipt of the OSF funds. This is because, on 12 November 2016, Deputy Minister for Home Affairs (I) Nur Jazlan Mohamed, had reportedly said that “OSF has been providing funds for the past 10 years and the government has been monitoring such activities but there [is] no concrete evidence that NGOs in the country are involved in activities that can disrupt the peace of the country by using the funds”, and that “the matter is still being investigated”.

The Malaysian Bar notes that OSF is not an “unlawful society” under the Prevention of Crime Act 1959 or Societies Act 1966, or a “listed terrorist organisation” under the Anti-Money Laundering, Anti-Terrorism Financing and Proceeds of Unlawful Activities Act 2001.

Moreover, it is rather incredible for the authorities to suspect that OSF funds were allegedly used by Maria Chin Abdullah to commit an offence under Section 124C of the Penal Code. The offence of “activity detrimental to parliamentary democracy” is defined in Section 130A of the Penal Code as “an activity carried out by a person or a group of persons designed to overthrow or undermine parliamentary democracy by violent or unconstitutional means” (emphasis added).

The definition of the offence is imprecise, but Sosma has been represented by the government as a law to deal with terrorism. It was therefore never intended to restrict or prohibit any form of peaceful and legitimate democratic activity.

It is also noteworthy that when Section 124B — for the main offence of activity detrimental to parliamentary democracy — was tabled in Parliament as an amendment to the Penal Code, the government declared that it was not to inhibit political dissent or peaceful assembly.

Indeed, a Member of Parliament observed, “Kalau nak buat perhimpunan aman atau bersih pun, itu tidak detrimental to Parliamentary Democracy.” (“Even if [they] want to hold a peaceful assembly or Bersih, that is not d etrimental to parliamentary democracy.”)

Abdul Gani Patail — the attorney general when Sosma was passed in Parliament — himself has stated that Sosma was “not intended to guillotine parliamentary democracy or suppress political freedom”.

In this regard, Section 4(3) of Sosma specifically carves out the defence of “political belief or political activity”, which the government also guaranteed when the legislation was tabled in Parliament.

Thus, no one is to be held liable “solely for his political belief or political activity”.

In the light of the above, the allegations of an offence under Section 124C levelled against Maria Chin Abdullah appear to be baseless, and her detention under Sosma cannot be justified.

The arrest and detention of Maria Chin Abdullah is widely perceived to have been intended to victimise and prevent her from leading the Bersih 5 rally on the day following her arrest. Any misuse of laws for ulterior or colourable purposes by the authorities cannot be condoned, as it would be tantamount to abuse of power.

It has also been reported that Maria Chin Abdullah is being detained in an unknown location, in solitary confinement in a windowless cell measuring 15 feet by 8 feet, forced to sleep on a slab of wood on the cement floor, and with lights kept permanently on, which could lead to disorientation, sleep deprivation and, consequently, serious medical complications.

These are oppressive, inhumane and degrading conditions of detention. It would appear that Maria Chin Abdullah is being subjected to the deplorable Internal Security Act 1960 (ISA)-type detention conditions, prior to the repeal of that law in 2012, which cannot be tolerated. It would thus seem that there has been a flagrant breach of the Lock-Up Rules 1953, which provide for conditions of detention and apply even for detentions under Sosma.

The United Nations Security Council Resolution 2178 (2014), unanimously adopted on 24 September 2014, provides that “Member States must ensure that any measures taken to counter terrorism comply with all their obligations under international law, in particular international human rights law…, underscoring that respect for human rights, fundamental freedoms and the rule of law are complementary and mutually reinforcing with effective counter-terrorism measures”.

In this regard, the conditions of detention faced by Maria Chin Abdullah appear to be in non-compliance with the United Nations Standard Minimum Rules for the Treatment of Prisoners (the Nelson Mandela Rules), which stipulate, inter alia:

“All accommodation provided for the use of prisoners and in particular all sleeping accommodation shall meet all requirements of health, due regard being paid to climatic conditions and particularly to cubic content of air, minimum floor space, lighting, heating and ventilation.”

“In all places where prisoners are required to live or work:

(a) The windows shall be large enough to enable the prisoners to read or work by natural light and shall be so constructed that they can allow the entrance of fresh air whether or not there is artificial ventilation;”[7] and

“Every prisoner shall, in accordance with local or national standards, be provided with a separate bed and with separate and sufficient bedding which shall be clean when issued, kept in good order and changed often enough to ensure its cleanliness.”

The abuse of Sosma and criminal procedures for the purposes of alleged Penal Code offences, particularly in a case that does not concern “security offences”, is abhorrent and repugnant to the rule of law.

The Malaysian Bar demands that Maria Chin Abdullah be released immediately and unconditionally.