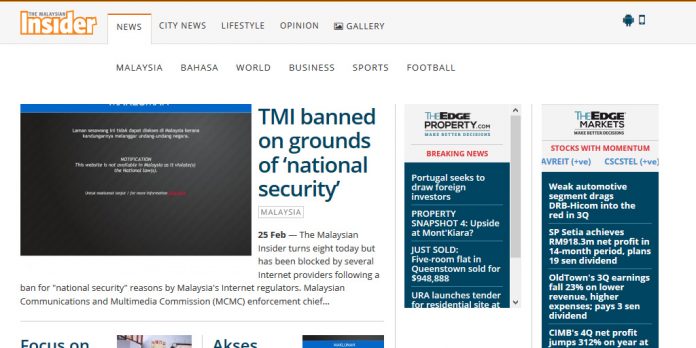 The blocking of any website should only be permitted under the direst of circumstances and must only take place after thorough and transparent investigation by relevant authorities. The swiftness with which the Malaysian Communications and Multimedia Commission (MCMC) took action and blocked The Malaysian Insider website implies that the MCMC did not conduct any investigation into the matter and made an arbitrary decision to block the Malaysian Insider.

Further, considering the importance of independent media and news reports, editors and officers of any news or media group should not be subjected to investigation under security laws for the publication of news articles. The use of Section 124(I) of the Penal Code should not and must not be interpreted and used as a law to supress the media. The invocation of Section 124(I) in this context can only be seen as a blatant act of intimidation and a direct threat against media and news groups with detention without trial.

Considering the standing of Malaysia as a member of the United Nations Security Council and the upcoming Human Rights Council sitting in which Malaysia would undoubtedly be under scrutiny, the government must take proactive steps to fulfil its international obligations and maintain a positive image in the international community.

READ MORE:  Why curiosity is part of journalism
Support the struggle to build a Malaysia based on Justice, Freedom, Solidarity:

The blocking of the Malaysian Insider and the investigations against its editors and officers would result in a failure by the government to fulfil the recommendations (Recommendation 146.160: Take steps to strengthen and promote) adopted by the government in the Universal Periodic Review and undermine Malaysia’s standing and image in the international community.