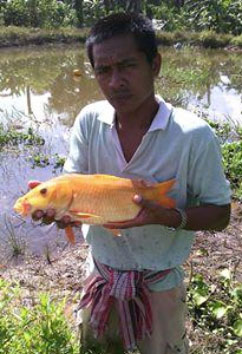 Supoj was shot in his car and was hit eight times – six times in the leg and twice in the arm. He has been taken to Chaiburi Hospital and his condition is being medically assessed. At the time of alert, the district doctor was transferring Mr Supoj to Surat Thani Provincial Hospital.

At the time of this alert, we urge you to immediately contact and follow-up with the Chaiburi District Police Station, Surat Thani province. The district police have been contacted and the police investigation officer has arrived at Khlong Sai Pattana community at the time of writing. We urge you to follow-up with the district police to ensure that they immediately carry out an effective investigation to apprehend and collect evidence on the gunmen….

Background on the Southern Peasants Federation of Thailand

The SPFT was set-up in 2008 to pursue the decades-long peasant movement for the rights and dignity of farmers, in a democratic society and State, and in a fairer economic system than present-day capitalism. The SPFT serves as a consciousness-raising, mobilising, and coordinating organisation for peasants in the south of Thailand to claim their rights to land, especially in the form of communal land titles, from the state on expired corporate concession lands.

Since its creation the SPFT has organised and supported the creation and development of six agricultural communities in Surat Thani and Nakhon Sri Thammarat provinces, South Thailand, including Khlong Sai Pattana community. These communities are democratically, communally organised by peasants who have been made destitute and landless as a result of the capitalist system in the South.

Furthermore, through the shared use and division of agricultural land, tools and tasks, these agricultural communities are a project of empowerment of peasants as they create a system for agricultural production, care for the land, and political economy, which guarantees a fair distribution of resources and equal respect for the rights, dignity and livelihoods for peasants as any other class in society.

Following the targeted shooting of community-based human rights defender Supoj Karasong, the Southern Peasants’ Federation of Thailand (SPFT) has taken measures to care for Supoj Karasang, as well as to lobby relevant authorities to take action to investigate on the attack and provide protection for the Khlong Sai Pattana community and SPFT leaders.

Supoj, at the time of writing, is convalescing in Surat Thani hospital. He had an operation … and he is now conscious and doing okay.

So far, Chaiburi District Police has taken some steps towards conducting an investigation into the targeted shooting of Supoj. Approximately an hour after the attack 10 police officers came to the incident scene and stayed for one hour. They found one bullet head inside the victim’s car, the other eight bullets were in Supoj’s body.

District police interviewed a Khlong Sai Pattana community member who was nearby when the attack happened. On Sunday, 10 April 2016, at approximately 20:00, Chaiburi District Police officers came to interview Supoj in the hospital room.

The letter requests that the NHRCT follow-up with the Chaiburi District Police investigation and coordinate with relevant authorities to provide urgent protection measures to support Supoj, his family, Khlong Sai Pattana community members and SPFT leaders.

The letter also seeks the NHRCT’s coordination with the Department of Special Investigations (DSI) to take up the cases of the five Khlong Sai Pattana human rights defenders who have been victims of targeted shootings over the past six years.

In a press conference afterwards Commissioner Angkhana Neelapijit said that it is her opinion as NHRCT Commissioner that DSI should take up the case of the SPFT community as influential people are involved in the aggression against the community-based human rights defenders. The involvement of influential people in this case means that it is within DSI’s duty to take on these cases.

The SPFT has submitted a request to meet with DSI Director of Complaints Department, Mr Banthit, at 10am on Tuesday 12 April 2016. We await the update of this meeting.