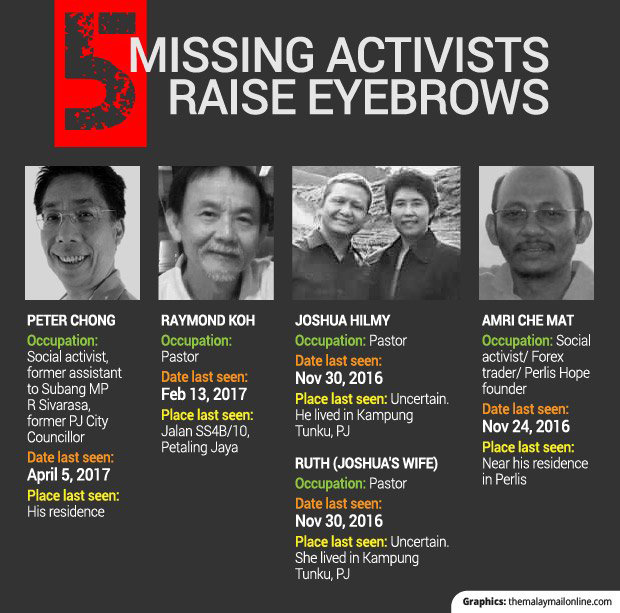 Hakam is deeply concerned to hear that Peter Chong, an activist, has been missing since Friday, 7 April 2017.

This is the latest in a series of such incidents where the abduction and disappearance, in some circumstances, indicate the use of extra-legal means by highly trained individuals. This has caused disquiet in the country over the last several months, as such incidents are unheard of in Malaysia.

In international human rights law, such abductions are called “forced disappearances”, which are defined as secret abductions with the tacit support of the state or other organisation. This is followed by a refusal to acknowledge the person’s fate and whereabouts thus putting the person outside the protection of the law.

Such heinous acts are a breach of international human rights laws and undermine the rule of law. Malaysia, which has twice had membership on the Human Rights Council and is now vying for another term, ought to view these disappearances very seriously.

Much as we support the efforts of the police in investigating these disappearances, much must be done (and seen to be done). We do not wish to see our country descend into a lawless state where such disappearances become part and parcel of our way of life.

We sincerely hope the police will use their utmost efforts so that that all abductees will be returned as soon as possible to their families. We also urge Suhakam to act urgently to address this mater directly with the police and the minister of home affairs.

Ambiga Sreenevasan is president of Hakam. The above statement was issued on behalf of the Hakam executive committee.