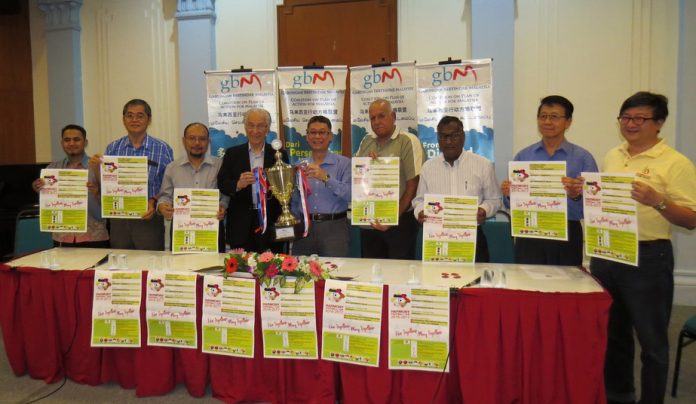 With “Let’s live together, play together” as the motto of the tournament, Gabungan Bertindak Malaysia (GBM) has initiated the Harmony Football Cup.

GBM chair Zaid Kamaruddin said it is in GBM’s essence to combine the strength of all races for the good of our nation. GBM also has other initiatives going on, and this is among the bigger ones.

With local football legends Santokh Singh, Soh Chin Aun and Shukor Salleh as honorary patrons, GBM looks to recreate unity through sports and bring youth together, like how the movie “Ola Bola” (2015), was able to inspire Malaysians by highlighting the peak of Malaysian Olympic football team in the 1980s and the togetherness of the Rakyat during those times.

No one understands the objective of the tournament better than our patrons: building friendship among youths from various ethnic communities and promoting better interaction and understanding among them in Malaysia through the most popular game among Malaysians – football.

The patrons have seen the changes from the times they were growing up as compared to now. With national unity as the tournament’s main aim, the patrons see the necessity of this Cup to bring youths together.

Pertubuhan Ikram Malaysia (Ikram), Kuala Lumpur and Selangor Chinese Assembly Hall (KLSCAH), Tamil Foundation and the Malaysian Consultative Council of Buddhism, Christianity, Hinduism, Sikhism and Taoism (MCCBCHST) will be joining hands and co-organising the first ever Harmony Football Cup. The competition at the national level will take place in Kuala Lumpur on 18-19 March 2017.

Stanley Yong, vice president of the Kuala Lumpur and Selangor Chinese Assembly Hall, opined that the key to a nation’s strength in the economy and social spheres is unity – but this has been undermined in recent years.

Raghavan, the president of the Tamil Foundation, stressed that those in GBM are not there merely to talk but will also walk the talk.

This football tournament is unique in that all participating teams are required to have players from at least three ethnic groups of Malaysia and no more than six players should come from one single ethnic group.

Teams from Kedah, Penang, Perak, Selangor, the Federal Territory of Kuala Lumpur, Negeri Sembilan, Malacca and Johor must compete in preliminary matches before the finals, where one team will emerge as the the first ever champion of the Harmony Football Cup 2016/2017.

Each of these states will organise their tournament from December 2016 to February 2017 at the state level and select a multi-ethnic team to participate in the final tournament in Kuala Lumpur on 18-19 March 2017.