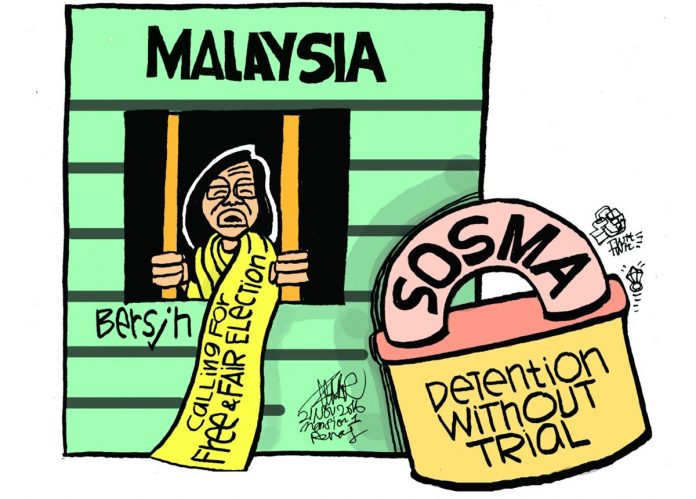 The provision of the 2012 Security Offences (Special Measures) Act (Sosma) that allows senior police officials to detain people without charge to investigate “security offences” will lapse on 31 July 2017, if not renewed by Parliament.

“Since 2012, Malaysian authorities have repeatedly used the security offences law to pursue a political agenda of detaining outspoken activists without charge,” said Phil Robertson, deputy Asia director at Human Rights Watch. “Parliament should recognise the harm this detention provision causes both for ordinary Malaysians and for Malaysia’s reputation abroad, and reject it before further damage is done.”

Section 4(5) of Sosma, which the government is seeking to reauthorise for another five years, permits detention for 28 days without any judicial oversight, violating international human rights standards for prompt judicial review.

Various cases in recent years show the ease with which the law can be abused, Human Rights Watch said. Authorities arrested Khairuddin Abu Hassan in Kuala Lumpur on 18 September 2015, for alleged “activity detrimental to parliamentary democracy” to prevent him from flying to the United States after he gave information about the 1Malaysia Development Berhad corruption scandal to authorities in France, Switzerland, Singapore, Hong Kong, and Britain.

When the court ordered him released on 23 September, he was rearrested and ordered detained under Sosma for 28 days pending investigation into alleged “sabotage against the state”.

Inspector General of Police Khalid Abu Bakar asserted that soliciting foreign investigations into 1MDB was an act of sabotage and a danger to Malaysia’s economy and sovereignty, and therefore a security offence.

The High Court rejected the government’s argument on 18 November 2015, ruling that banking and financial cases were not security offences within the meaning of the law. The judge ordered the release of both men on bail. By that time, Khairuddin had been detained for eight weeks. A three-judge panel at the Court of Appeals unanimously affirmed the High Court decision on 14 December 2016. The government indicated that it would appeal.

In another case, authorities arrested Maria Chin Abdullah, chair of the Coalition for Clean and Fair Elections (Bersih), under Sosma on 18 November 2016, the eve of a major Bersih rally. She was ordered detained for 28 days, thus missing the rally.

The police claimed the detention was necessary to investigate an alleged activity detrimental to parliamentary democracy related to Bersih’s receipt of funds from the foundation headed by philanthropist George Soros.

Maria Chin was held in solitary confinement for 11 days before being released on 28 November, the day before a judicial hearing on a habeas corpus petition filed by her lawyers. She has not been charged with any crime.

The authorities also used Sosma to detain Siti Noor Aishah, a student arrested on 13 March 2016, for possessing 12 books that were considered “terrorist material”. None of the books, which she said she was using for her master’s degree research, were banned in Malaysia.

On 29 September, the High Court acquitted her of all charges without requiring her to present a defence. As soon as she was released, the authorities rearrested her under the draconian Prevention of Crime Act and detained her for another 60 days, then released her under house arrest with electronic monitoring.

After the Court of Appeal ordered the case sent back to the High Court for entry of her defence this week, the authorities again arrested her under Sosma.

“Malaysian officials evidently view Sosma as a shortcut to harass and silence human rights activists and anti-corruption campaigners with prolonged detention without charge,” Robertson said. “Parliament should uphold basic rights and let these detention provisions lapse, then follow up with revisions or repeal of the entire abusive law.”