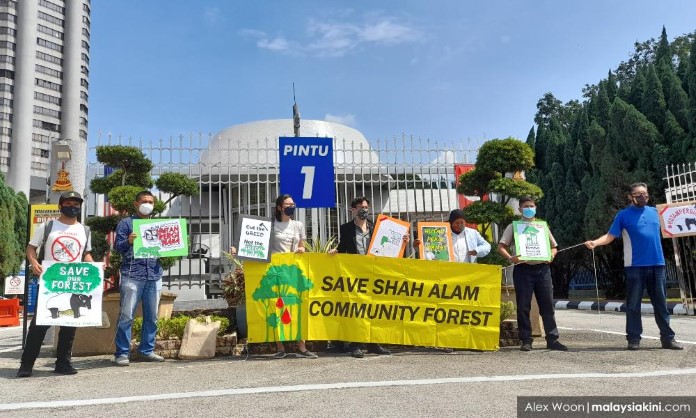 Fifty-three civil society organisations have come together to issue a statement initiated by BEACCH (Biodiversity, Environment, Agroecology, Climate Change and Habitat), the environmental cluster of the CSO Platform for Reform in Malaysia, urging Selangor Menteri Besar Amirudin Shari to immediately revoke the de-gazetting of the Bukit Cherakah forest reserve based on a decision made over 22 years ago by the then Barisan Nasional government.

A gazette notification (Gazette no 1645) dated 5 May announced that the state had excised 406.22ha from the Bukit Cherakah Forest Reserve, Shah Alam, based on a decision by the Selangor state executive council on 20 November 2000.

The excision of the said forest reserve was done under Section 11 of Selangor’s National Forestry Act (Adoption) Enactment 1985 (Selangor NFA 1985).

According to a recent statement by the Selangor Forestry Department, the exercise was conducted to complete a process that purportedly began in 2000, with the current state government taking an appropriate role in resolving matters delayed for over two decades.

Why it took them over two decades remains a mystery.

Furthermore, in excising the Bukit Cherakah forest reserve, the state has also failed to comply with Section 12 of the Selangor NFA 1985, where they should have provided replacement land of the same size as the excised area as a permanent reserved forest.

In addition to this, the Selangor government had amended their forestry enactment in 2011 to provide for mandatory public inquiries prior to any excision of forest reserves. This is provided for under the Selangor Public Inquiry (Selangor) Rules 2014.

The current state government under Pakatan Harapan should have held a mandatory public inquiry before the excision, but they clearly did not, making the excision all the more unlawful.

The final decision on the excision of any forest reserve following the public inquiry must be made by the state legislative assembly. This step will allow for all key facts to be revealed. Ultimately, the people’s representatives can debate and decide on the matter publicly.

Bukit Cherakah was created in 1909 and is popular with nature lovers, hikers and tourists. The forest reserve is also home to a diverse range of flora and fauna, including tapirs, white-handed gibbons and hornbills, as well as over 450 species of plants.

While the steep hills are great for a challenging hike and ecotourism, it is not appropriate for development which would cause soil erosion and landslides. The increased siltation may also contribute to flash floods downstream, evidence of which can be seen in prior flash flood incidents plaguing the country, including the recent Baling flood tragedy and the devastating floods of December 2021.

Taking a leaf from all the recent tragic events and the worsening climate, the state government should do the right thing and revoke this de-gazetting.

The excision does not benefit the general public or the environment, especially when the Selangor state government intends to keep at least 30% of its forest reserves, as stated in the Selangor Structure Plan 2035.

All 53 civil society groups, including BEACCH, demand that the Selangor state government follows due legal process and revoke the said gazette immediately. – Malaysiakini

This statement is endorsed by:

Does anyone care about the auditor general’s reports?

We must fix this ‘electile dysfunction’!