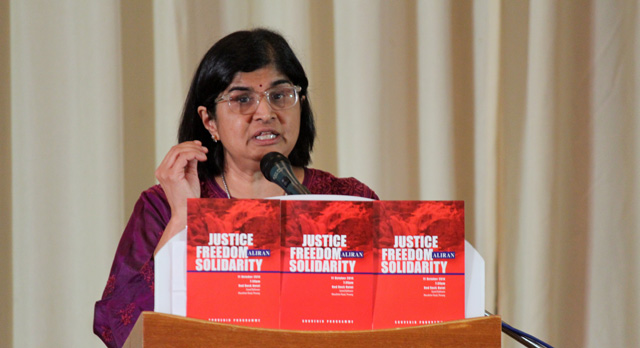 The Malaysian Bar congratulates Ambiga Sreenevasan, a former president of the Malaysian Bar, on her recent appointment as a commissioner of the International Commission of Jurists.

A very senior Member of the Malaysian Bar, Ambiga is the fourth Malaysian to have been appointed as a commissioner of this prestigious international organisation, renowned for its rigorous defence of the rule of law.  Previous commissioners from Malaysia were former Lord President Mohd Suffian Hashim as well as Raja Aziz Addruse and Param Cumaraswamy, both former presidents of the Malaysian Bar.

Ambiga has over three decades of experience in a wide array of civil, commercial and corporate litigation matters, and is also actively involved in public interest litigation.

She has always been a strong and unwavering voice for human rights, justice and the rule of law.

As president of the Malaysian Bar from 2007 to 2009, Ambiga played a crucial role in leading the Bar Council in establishing — together with the International Bar Association, Lawasia and Transparency International-Malaysia — a panel of eminent persons in 2007 to review the Malaysian judicial crisis of 1988.  The findings of the panel, issued in a report in 2008, received tacit recognition from the government when ex gratia payments were made to the judges concerned.

Ambiga was one of eight recipients of the United States Secretary of State’s 2009 International Women of Courage Award, which “honours women around the globe who have exemplified exceptional courage and leadership in advocating for human rights, women’s equality, and social progress, often at great personal risk”.

In 2011, she was conferred an Honorary Doctorate of Laws by her alma mater, the University of Exeter, and bestowed the Chevalier de la Légion d’Honneur (Knight of the Legion of Honour) by the French government for her work in advancing human rights.

From 2011 to 2013, Ambiga was the chairperson and then the co-chairperson, of Bersih 2.0, a civil society movement advocating free and fair elections in Malaysia. She is a patron of Global Bersih, which is the global arm of Bersih 2.0.

The Malaysian Bar wishes Ambiga all the very best and assures her of our fullest support in this new undertaking.