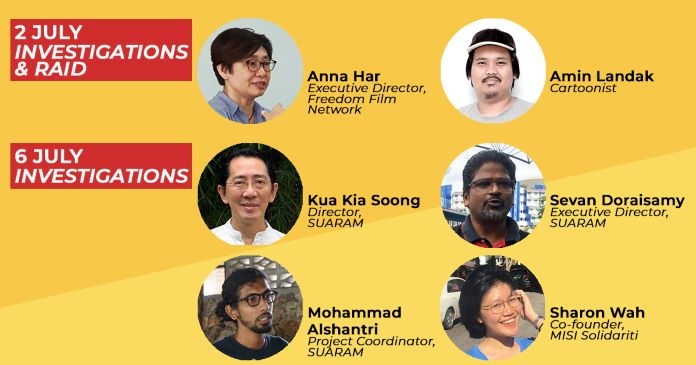 Malaysia’s new Prime Minister, Ismail Sabri Yaakob, should commit to respect the rights to free speech and peaceful assembly, which have long been suppressed in the country, Human Rights Watch said.

“Malaysian authorities over the past year have taken a very heavy-handed approach to any criticism of the government by harassing and prosecuting peaceful protesters, journalists, and activists,” Linda Lakhdhir, Asia legal advisor at Human Rights Watch, said. “The appointment of a new prime minister offers an opportunity to reset attitudes about the importance of a more open, rights-respecting society in Malaysia.”

During the 17 months that Mahiaddin served as Prime Minister, the authorities responded aggressively to criticism of government policies and performance. In the past two months alone, police have opened multiple investigations into peaceful protests and criticism. The new government should end these and other efforts to investigate and prosecute people simply for exercising their civil and political rights. For example:

The authorities are investigating the creators of a short animated film depicting the abuse one boy said he suffered in police custody. On 23 July, the police called in for questioning Anna Har, the filmmaker, and Amin Landak, the cartoonist, and raided the offices of Freedom Film Fest, which screened the film. Four participants in a post-film forum, including the executive director of human rights group Suara Rakyat Malaysia, were also called in for questioning. All six are being investigated for criminal defamation and other violations of the Penal Code, and violation of Section 233(1)(a) of the Communications and Multimedia Act, a broadly worded provision that criminalises online content that “is obscene, indecent, false, menacing or offensive in character with intent to annoy, abuse, threaten or harass another person”.

READ MORE:  Bersih soldiers on for electoral reform
Support the struggle to build a Malaysia based on Justice, Freedom, Solidarity:

On 6 July, the police announced they were investigating for sedition and other offences the “black flag” campaign, which urged people to display black flags in front of their houses or shops to voice their disappointment with the government. At least 31 people who participated in a black flag vehicle convoy on 24 July were summoned for questioning. While most are being investigated under the Prevention and Control of Infectious Diseases Act and an emergency ordinance relating to the control of Covid, some are being investigated under Section 233 of the Communications and Multimedia Act for allegedly encouraging participants to join the protests.

On 27 July, the authorities formally charged activist Heidy Quah with violating Section 233(1)(a) of the Communications and Multimedia Act for a June 2020 Facebook post alleging poor treatment of refugees at an immigration detention centre.

People participating in a series of peaceful protests about the government’s handling of the Covid pandemic have also faced investigation.

On 21 July, youth coalition Sekretariat Solidariti Rakyat (SSR) announced it would hold a protest on 31 July against the government’s handling of the Covid pandemic.

On 29 July, the police arrested activist Sarah Irdina of youth group Misi Solidariti at her home. She was questioned for 10 hours under the Sedition Act and the Communications and Multimedia Act for posts calling on people to participate in the protests. On the same day, police questioned three members of SSR under Section 233 of the Communications and Multimedia Act and Section 505(b) of the Penal Code, which criminalises “making statements conducive to public mischief”.

After the 31 July protest took place peacefully, the police called in at least eight people for questioning, including a lawyer who was monitoring the protest on behalf of the Malaysian Bar Council.

On 19 August, 31 people who were holding an outdoor candlelight vigil for those who died of Covid were forcibly detained by the police and taken to the police stations in police vans. Photos taken at the scene show the police dragging some participants to the vehicles. At least one participant subsequently filed a police report over physical injuries she said she sustained by the police. All 31 were later released after being fined RM2,000 ($481) each for violating regulations prohibiting demonstrations during the pandemic.

Two of the participants, including Nalina Nair, an activist and member of the opposition Democratic Action Party, were subsequently charged under Section 90 of the Police Act, which states that “any person who, in a police station, behaves in a riotous, indecent, disorderly or insulting manner shall be guilty of an offence under this Act”.

“Under former Prime Minister Muhyiddin, the authorities engaged in wholesale harassment and intimidation of peaceful critics,” Lakhdhir said. “Those in power in Malaysia should recognise that everyone has a right to criticise their performance and make a commitment to protecting the rights to freedom of speech and peaceful assembly.” – Human Rights Watch