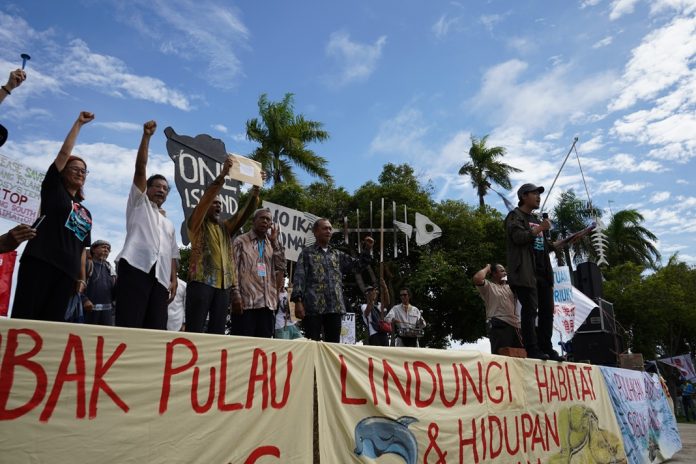 The Consumers’ Association of Penang (CAP) and Sahabat Alam Malaysia (SAM) strongly object and are upset that the Penang sgtate overnment is still continuing with the masterplan design competition for the development of three man-made islands under the Penang South Reclamation project.

One month ago, the chief minister announced that a formal agreement between the state government and its project delivery partner, SRS Consortium, would be signed in January this year.

The state government is proceeding as if all the approvals will be given and any legal challenge to its project will be decided in its favour regardless of objections by interested parties like the Sungai Batu Fisherfolk’s Unit and civil society organisations. This makes a mockery of civil society participation in decision-making on public matters and the legal process to ensure environmental protection and social justice.

A representative of the Sungai Batu Fisherfolk’s Unit had filed an application in July last year to the Appeals Board, set up under the Environmental Quality Act 1974, to challenge the approval by the Department of Environment (DoE) of the environmental impact assessment for the Penang Southern Reclamation project. The appeal has not been heard and decided.

Also, the Ministry of Transport has given only conditional approval for the Bayan Lepas light rail system project. Transport Minister Anthony Loke had said that, after getting the feedback from the people, another final approval application for the railway scheme has to be submitted to the ministry for final approval under Section 84(5) of the Land Transport Act 2010. Up to now, there has been no announcement of the final approval of the project.

READ MORE:  Penang's three-island mega-project: Summary of the Appeal Board decision
Support the struggle to build a Malaysia based on Justice, Freedom, Solidarity:

The authorities must be transparent in making their decisions and give reasons for rejecting the objections of civil society organisations. For example, the elevated light rail project will cost between RM8bn and RM10bn but an autonomous rail rapid transit or bus rapid transit would cost only a fraction of the elevated light rail cost. Civil society groups have submitted facts and figures on the low-cost alternative system but the Ministry of Transport had given conditional approval to a financially unsustainable system. Why? The public is entitled to know the reasons.

The Sungai Batu fisherfolk have challenged the approval of the environmental impact assessment on various grounds, including that the DoE’s approval of the assessment was premature as the environmental impact assessment was incomplete and had not taken into account the conditions imposed by the Ministry of Agriculture and that the project undermines Malaysia’s obligations under the Convention on Biological Diversity. These are substantial grounds and the matter could be litigated right up to the Federal Court and could take many months.

Therefore, what is the rationale for signing a fresh project delivery partner agreement with the Gamuda-led SRS Consortium? Is it to influence the decision of the courts by pleading that the agreement has been signed and its consequences in the event of a breach? It is highly irresponsible on the part of the government to expose itself to legal suits in the event the RM47bn Penang transport project cannot proceed.

We call on the state government not to sign an agreement with the Gamuda-led SRS Consortium and to appoint an independent traffic consultant firm to study SRS’ transport proposal and the alternative transport systems proposed by civil society organisations and to make its recommendations.

We also urge the Ministry of Transport not to give final approval to the elevated light rail project in view of its exorbitant cost compared to other cheaper alternative modes of transport, and the financial burden the present and future generations will have to bear.

ABOUT US
Aliran is a reform movement in Malaysia promoting justice, freedom and solidarity.
Contact us: [email protected]m
FOLLOW US
Content may be reproduced without alteration but please attribute to aliran.com
wpDiscuz
1
0
Would love your thoughts, please comment.x
()
x
| Reply