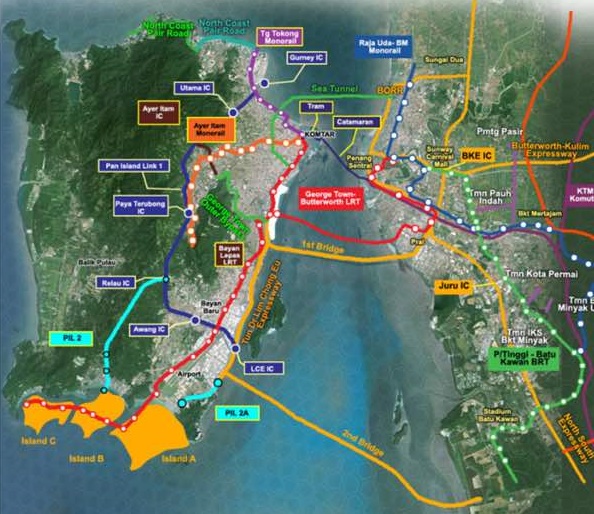 The Consumers Association of Penang has called on the Penang state government to release for public viewing the agreement signed with the consortium and to reveal whether there is any exit clause in it.

The Penang state government has no powers to issue bonds to finance the three reclaimed islands project costing RM11bn without the approval of the federal government.

Article 111(2) of the Federal Constitution makes it abundantly clear that a state is allowed to borrow, for a period not exceeding five years, from a bank or other financial source only with the approval of the federal government.

Further, under Article 111(3), a state shall not give any guarantee except with the approval of the federal government.

Thus, in view of the Article 111 restrictions, how can the state government raise funds for the mega project by issuing bonds without getting the approval of the federal government?  Any attempt to do so will be illegal and unconstitutional.

It is strange that the state government sought advice from financiers, and not the attorney general or the state legal advisor, on whether federal government approval is needed to issue its bonds.

This raises a serious question on the functioning of the state government. Is it being run by businessmen or by elected members advised by constitutionally appointed officials?

Why was the state government in a hurry to sign the agreement with SRS Consortium – which is made up of Gamuda Bhd with a 60% share, Ideal Properties (20%) and Loh Poh Yen Holdings (20%) – when major issues have not been resolved?

There is a challenge to the approval of the environmental impact assessment for the project in the Appeals Board which has yet to be heard. Is the government so confident that the decision would be in its favour?  What happens if the decision is against it and in favour of the fishing community? The rakyat will have to bear the claims, if any, arising out of the contract.

The issue of financing the project has not been settled. The government has no idea as to how to raise the funds except to rely on the consortium to “propose a plan on how to finance the project”. Why not seek assistance from the Ministry of Finance or the Economic Planning Unit? Why rely totally on the private sector with vested interests?

It is highly irresponsible for the government to burden itself and the people with legal commitments to the consortium when there are so many uncertainties in the economic environment today, arising principally out of the Covid-19 pandemic.

Many economists are predicting a serious recession, even economic depression. Projects are being shelved and large companies are going bankrupt. Forbes reported: “Some of the biggest names in corporate America are in danger of going the way of Sears, Blockbuster and RadioShack.” In this adverse economic environment, the state government has inked the agreement with the consortium.

Penang Chief Minister Chow Kon Yeow said that the reclamation of “Island A” to the southeast of Penang Island would be given priority so as to cater to the booming manufacturing industry at Bayan Lepas.

However, there is no “boom” that we know of in the Bayan Lepas industrial area. What we hear about is retrenchments and lay-offs of workers.

If space is needed for industries, there is plenty of land in Seberang Perai. Why concentrate all development on the island? It makes no sense that, despite the availability of land for industries, the government wants to undertake massive reclamation of the sea – which will have disastrous consequences for the environment, fisheries and the socioeconomic status of the fishing communities.

Chow said the “Penang Transport Master Plan” (PTMP) was of paramount importance to improve the worsening traffic situation in Penang.

The PTMP was drawn up by the consortium of developers and contractors and not by an independent traffic consultant. The cost of the PTMP is exorbitant, amounting to RM46bn. The reclamation project will cost RM11bn and would take over 35 years to complete. The focus of the consortium proposal appears to be increasing the land bank and not alleviating traffic congestion.

Civil society organisations have criticised the PTMP with facts and figures and proposed a much cheaper alternative to ease our traffic problems without having to resort to the disastrous reclamation of the seas.

The state government has turned a deaf ear to their appeals and stubbornly insists on proceeding with the RM57bn mega projects which will place a terrible financial burden on the people. It has been reported that the consortium will receive 5% of the cost of the project, which will run into billions of ringgit.

We call on the Penang state government to release for public viewing the agreement signed with the consortium and to reveal whether there is any exit clause in it. The federal government should not approve the issue of any bonds by the state or guarantee loans to finance this mega project.

Mohideen Abdul Kader is president of the Consumers Association of Penang