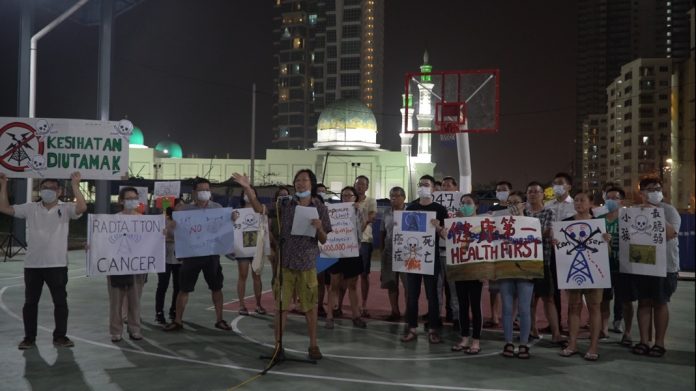 Residents of Bandar Sri Pinang are opposing the construction of 5G towers in the Karpal Singh Drive area before the health impact of this new technology can be properly studied.

The Malaysian Nuclear Agency director-general, Dr Mohd Abd Wahab Yusof, has reportedly said a thorough study on the impact of 5G technology will be conducted at the end of this year. In other words, the risk of 5G technology on human has not yet been determined.

More 5G towers will be built closer to inhabited residential areas. Despite this, Nuclear Malaysia research officer Roha Tukimin has reportedly declared that exposure to 5G non-ionising radiation will not affect health.

Recently, Penang Chief Minister Chow Kon Yeow hastily announced the plan to roll out new 5G technology starting in this month. According to him, Penang is one of the six states in the country to lead in the provision of infrastructure for 5G technology, which relies heavily on small towers installed together 5G antennas across the state.

Prior to the chief minister’s announcement, hundreds of concerned residents in Bandar Sri Pinang, Penang, signed a petition against the proposed installation of two 5G towers.

The towers were to be built along Karpal Singh Drive, a popular public recreational space in Penang and high-density residential area.

The residents were shocked to learn that the Penang Island City Council had hastily approved two 18m-tall towers in June 2019 before gathering feedback from nearby residents.

A telecommunications company organised a dialogue session on 18 September 2019, attended by Jelutong MP RSN Rayer and Sungai Pinang state assembly member Lim Siew Khim, together with Ministry of Health and Nuclear Malaysia officials. At the session, the residents were promised a win-win solution: relocation of the towers to a site 600m away from the residential area.

After the dialogue session, however, the residents were shocked to learn from the city council that the rolling out of the 5G test towers in the residential area would be carried out regardless of the residents’ protest.

The unacceptable approval of and hasty rollout of the 5G towers shows that the local government has gone against the essence of the democratic process championed by the Pakatan Harapan government. It has totally ignored the wishes of the rakyat.

The residents are completely shocked and dumbfounded and feel betrayed. The government has disregarded not only the residents’ voices but also their health concerns, especially when the effects of the radiation emitted by 5G technology are still controversial.

5G rollout: We are not laboratory mice

According to scientists, 5G will massively increase the microwave and millimetre waves (radiation in the millimetre band). It will also use new frequencies that have not been evaluated by experts who are independent of industry.

Already, 253 scientists and doctors around the world have recommended a moratorium on the rollout of 5G until potential hazards to human health and the environment have been fully investigated by scientists independent of industry.

The concerned residents strongly oppose the proposed 5G towers because they do not want to be treated like laboratory mice. They question the validity of the current safety standards set by the Malaysian Communications and Multimedia Commission (MCMC), which is set at 1,000 microwatts per sq metre at 2G Hz frequency and above – the radio spectrum used for 5G – which is an outdated international guideline.

Numerous scientific studies have shown that the ubiquitous and increasing exposure to non-ionizing electromagnetic fields (EMF) generated by electric and wireless devices affects humans at levels well below most international and national guidelines.

Therefore, the 247 scientists engaged in the study of the biological and health effects of non-ionising EMF around the world had in 2015 called for protection from non-ionising EMF exposure before the additional 5G rollout.

The World Health Organization’s International Agency for Research on Cancer has classified wireless radio frequency as a possible human carcinogen, a substance capable of causing cancer in living tissue.

Scientists have declared that cell towers, sources of wireless , are harmful to humans. With the invention of 5G, the WHO is also studying the health impacts of this new technology, the risks of which are not yet known.

In Malaysia too, research on 5G has not yet been done, and the risks have not yet been examined. But the government has already hastily announced the rolling out of 5G.

Many recent scientific studies have shown that residents near cell towers are prone to cancer risk, cellular stress, increase in harmful free radicals, genetic damage, structural and functional changes to the reproductive system, learning and memory deficits, neurological disorders and other negative impacts on general wellbeing.

Together with our sisters and brothers in Switzerland and other concerned citizens of the world, we, concerned Penang residents, too want our government at all levels to impose a moratorium on 5G technology being installed in residential areas until its risks can be properly assessed.

Our voluntary writers work hard to keep these articles free for all to read. But we do need funds to support our struggle for Justice, Freedom and Solidarity. To maintain our editorial independence, we do not carry any advertisements; nor do we accept funding from dubious sources. If everyone reading this was to make a donation, our fundraising target for the year would be achieved within a week. So please consider making a donation to Persatuan Aliran Kesedaran Negara, CIMB Bank account number 8004240948.
Subscribe
16 Comments
Newest
Oldest Most Voted
Inline Feedbacks
View all comments

ABOUT US
Aliran is a reform movement in Malaysia promoting justice, freedom and solidarity.
Contact us: [email protected]
FOLLOW US
Content may be reproduced without alteration but please attribute to aliran.com
wpDiscuz
16
0
Would love your thoughts, please comment.x
()
x
| Reply