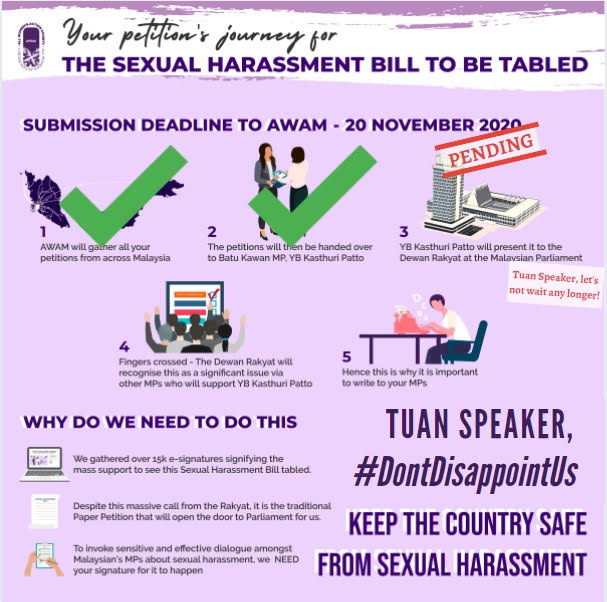 The All Women’s Action Society (Awam), together with the Malaysian public, calls upon the government to commit to a date [early in 2021] for the tabling of the Sexual Harassment Bill.

Awam submitted a paper petition to Parliament through Batu Kawan MP, Kasthuri Patto on 10 December 2020 with the hope that the Speaker, Azhar Harun, would allow for a sensitive and effective discussion among MPs about sexual harassment. We also called upon the government to commit to tabling the Sexual Harassment Bill before the end of the last parliamentary session on 17 December.

In the throes of the coronavirus pandemic, we see sexual harassment as an even more prevalent threat to the wellbeing of Malaysians. As of 15 December, Awam’s Telenita Helpline recorded 143 cases in 2020 alone.

In October, Awam started an online petition in support of tabling the bill in November 2020. With 17,500-plus electronic signatures, the online petition attests to mass public support to see the Sexual Harassment Bill tabled at last.

To do justice to this loud call from the rakyat, Awam took an unprecedented step to start a physical paper petition that could be taken to Parliament. Awam opened the paper petition for signatures on 9 November. In the span of two weeks, despite the constraints of the conditional movement control order limiting physical movement between districts and states, Awam collected 500-plus physical petition signatures. With signatures from Kangar to Johor Bahru, and from Labuan to Kuching, Awam is proud to say that this is a nationwide cause.

The bill has been 20 years in the making. The time has come to address the issue of sexual harassment head on by providing the legal infrastructure to deliver swift and adequate justice to survivors. Awam, with the backing of a significant portion of the rakyat, sincerely believes a safer Malaysia is at stake.