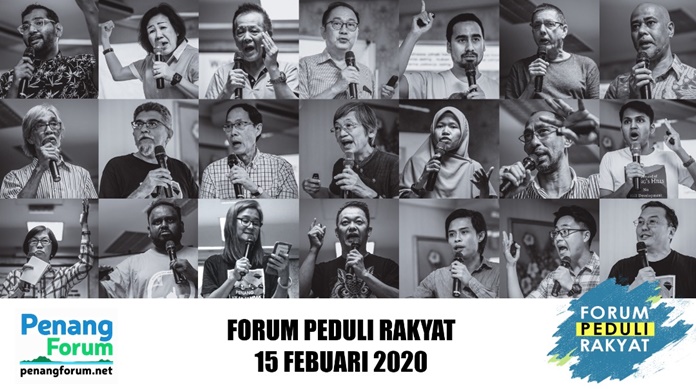 Until the Penang state government shows it is willing to genuinely engage with the public, civil society will continue to press for more transparency, accountability and public participation, says Lim Mah Hui.

The Penang Peduli Rakyat forum on 15 February was organised by Penang Forum to provide a platform for citizens to articulate their concerns. It was not the usual Penang Forum meeting because of the 20 speakers, only five were members of Penang Forum.

The topics included the problems surrounding water management in Penang, disposal of plastic waste in Sungei Petani, sand mining in Perak, and acquaculture and destruction of mangrove in Ayer Tawar.

The forum also touched on overcrowding of hostels for foreign workers and the need to stop human trafficking.

Ten DAP state representatives accused Penang Forum of a “publicity stunt to trap and tarnish the PH state government because the invitations were sent out last minute”.

Penang Forum held a press conference on Wednesday, 12 February to notify members of public about the event.

On top of that, I personally wrote to 40 state representatives and about 10 MPs in Penang to invite them to attend. The email invitation was sent out on 11 February, four days before the forum. If they could not attend, they at least could have sent representatives.

Alas, only three replied, and all said they could not attend. The 10 state representatives accused me of being political because I had spoken twice in Gerakan events – one on the PTMP and more recently on local democracy.

Have they forgotten they were proud to be associated with civil society and even jumped on our bandwagon to oppose the previous government on issues ranging from development in Penang Hill, to the construction of the Penang Outer Ring Road, to the mammoth Penang Global Convention City (PGCC) and the destruction of heritage buildings?

Today, Chow Kon Yeow is chief minister and pushing for the Pan Island Link highway, an extension and expansion of PORR.

Finally, the 10 state representatives claim this state government has done more engagements with the public than any previous governments. A 2017 study on public participation and citizens’ engagement in Malaysia by MIT researchers found that the type of engagement is more pseudo-participation than genuine participation.

The hundreds of public engagements on the PTMP by the state are nothing more than top-down public briefings on projects that they have already decided on. The questions that we and other scholars raised regarding the inconsistencies and factual errors in the PTMP have not been addressed adequately.

As an example, back in 2015, we questioned the validity of SRS’ claim that the elevated light rail transit would have 42 million ridership in its initial years of operations. We estimated that 8 million ridership may be more realistic, with forecasted annual operating and maintenance expenditure of RM170m, with the state annual deficit at RM140m.

Instead of engaging with us, the state government persisted to push for the light rail transit. Five years later, in 2019, they suddenly appeared to accept our estimates, and reduced the initial ridership forecast to 7 million. However, they also scaled down its annual operating expenses from RM170m to RM32m.

I questioned this in a meeting with the chief minister and SRS – that it is not possible to cut the operating expenditure to that level unless the operator plans to reduce the frequency and number of trips, to which the answer was no.

Until the state government shows it is willing to genuinely engage with the public, civil society will continue to play its role to press for more transparency, accountability and public participation.