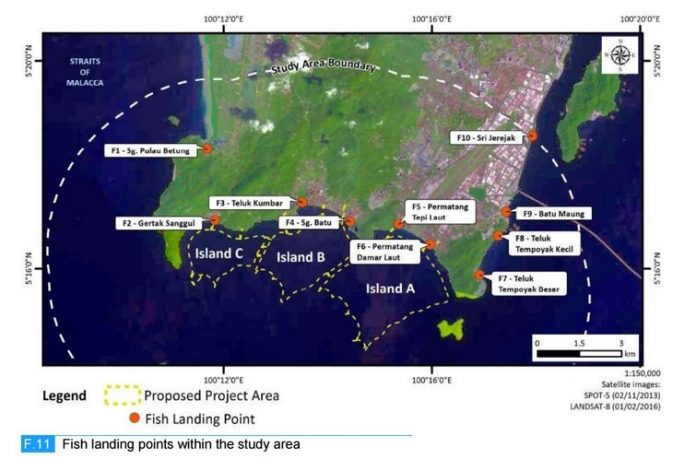 The project raises many concerns about the permanent negative impact that will be incurred on the environment and to the people living in the surrounding communities.

The Penang state government argues that for Penang to maintain its competitive edge, the Penang South Reclamation project is essential. However, TBRA is concerned that the state continually fails to take into consideration the health, environmental, and social impacts of this massive endeavour.

We are encouraged by Nurul Izzah’s comments: “The Ministry of Environment and Water must revoke any earlier approval provided by the Department of Environment; and energise all possible efforts to collaborate with the Penang State Government in managing the people’s socio-economic recovery as we chart the uncertain post-pandemic recovery terrain.”

The environmental impact assessment report for Penang South Reclamation project clearly states that: “Permanent destruction and residual impacts will be suffered by the mudflat ecosystem, fishing grounds, turtle landings, and some of the coral reefs on Pulau Rimau. This permanent destruction will have a significant negative impact on fisheries resources, fishermen and the security of the country’s food supply.”

The TBRA is alarmed that the Penang state assembly member for Tanjung Bunga, Zairil Khir Johari, who is also the Penang State Infrastructure and Transport Committee chairman, has once again come out vehemently to support this project. He seems oblivious to the real environmental and financial consequences of this project.

Zairil points to an “independent study” by Pricewaterhouse Cooper (PwC) to back his claim that the Penang State Reclamation would be a “key recovery driver of the state”. Unfortunately, this study has not been made available to the rakyat – and we hope he would be kind and responsible enough to share the entire study freely on his social media platforms.

While it is impossible to say with certainty what the legacy of the Covid pandemic will be for Penang and its government’s proclivity for mega-projects, what has become obvious is that employees have ditched their commutes and office spaces and switched to working from their homes.

The state government needs to see this as a watershed moment in history that marks the end of an era of traffic jams and ushers in a new one.

The business models for delivering infrastructure will need to change, whereby parks, trails and other green spaces need to take higher priority.

Perhaps the state government needs to rethink its mega-projects like the Penang South Reclamation, which involves filling sand and rock material equivalent to 76,000 Olympic-size swimming pools into a narrow straits with a sensitive ecological system – as the changes to our climate and the repercussions of this pandemic will require more creative thinking about urban infrastructure.

Anything that decreases the dependence on the car is a good thing for climate change and sustainability and for its effect on the family budget and the cost of urban infrastructure.

The TBRA is encouraged by the rapid appearance of new bike lanes on the island and hopes that the government will use this crisis to rebuild our economy based on modern, better and more humane strategies. We need a very different kind of economics if we are to build a socially just and ecologically sound future for the next generation.

We therefore support Nurul Izzah’s to cancel the PSR project. It is the right thing to do.