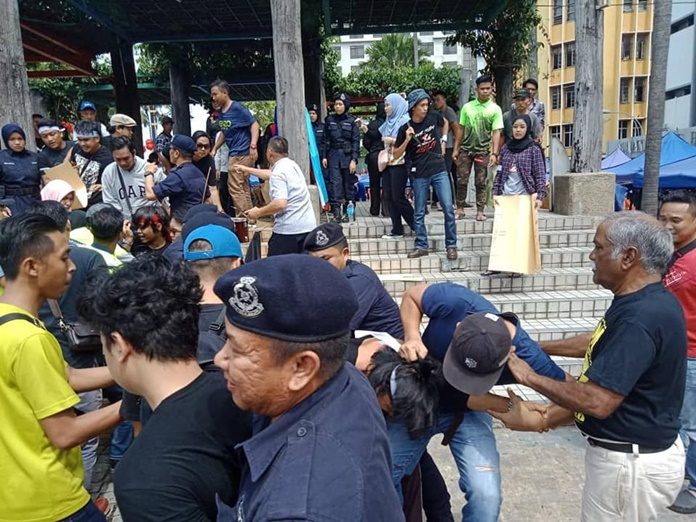 Hakam condemns the Sabahan police’s attempts to stop a peaceful assembly and the arrest of eight student activists in a “Pandang ke Sabah” rally today.

Despite the new government’s promise for greater democratic freedoms, the authorities have maintained the same archaic approach to quell expressions of dissent with the full force of the law.

In particular, the authorities have disregarded the Sabah activists’ constitutional right to assemble peacefully under Article 10 of the Federal Constitution.

Hakam also condemns the subsequent statement of Azis Jamman, the Deputy Home Minister, who claimed the assembly was “unnecessary” and for the activists to instead use the “proper channel” to air their grievances.

Any citizen of Malaysia has the right to assemble peacefully – regardless of whether the government deems it necessary or proper. The government’s duty is not to dictate to citizens on whether and when they should exercise their rights, but to respect the exercise of such rights.

Hakam wishes to remind Pakatan Harapan that it has condemned such a similar heavy-handed approach in the past and has even promised to abolish draconian laws including the Peaceful Assembly Act 2012 in Promise No 27 of their manifesto.

In this respect, Hakam commends the statements by several cabinet ministers which defended the activists’ right to assemble peacefully, including Youth and Sports Minister Syed Saddiq and Defence Minister Mohamad Sabu.

Hakam reiterates its call for the repeal of the Peaceful Assembly Act 2012 and for a moratorium on its enforcement pending its repeal in Parliament.

Hakam further urges the Ministry of Home Affairs and the police to emulate other jurisdictions such as the UK, which – instead of dispersing and arresting – channel resources instead to facilitate their citizens’ right to assemble and march peacefully.

Lim Wei Jiet is secretary-general of Hakam. This statement was issued on behalf of the Hakam executive committee.