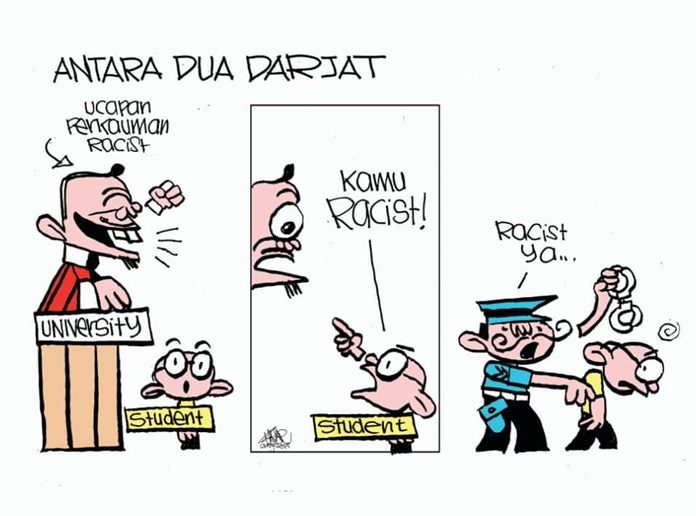 The Malaysian Academic Movement (Gerak) is astounded and appalled at the concerted backlash that university student’s simple act of civil disobedience has caused.

While some academics have publicly responded, no academic body has released a statement, leaving one lone young graduate to wake us all up the last weekend to what the congress was all about.

When engineering graduate, Wong Yan Ke walked up the University of Malaya stage to collect his scroll and then unveiled his little hand-written poster while calling the vice-chancellor out as a racist for his role in the congress, perhaps he didn’t suspect that the whole administrative machinery in the university would come down to crush him.

In this regard, even Gerak is astounded and appalled at the concerted backlash that Wong’s simple act of civil disobedience has caused. Were it not so serious, this whole episode could have been something out of a Monty Python movie.

In this regard, like more organisations that are speaking out now, Gerak stands firmly behind Wong and his right and freedom to say what he said – even saying it in a setting that has been contrived over the years to be sombre and respectful. The key word here is `contrived.

For those who say that it was the wrong venue, we ask, what other more effective venue was there?

At any rate, now supporters of the status quo and of the vice-chancellor are tripping over themselves to attack Wong, depicting him as “biadap” (rude), “lacking class” and worse, though predictably, a “racist”.

Gerak believes that these attacks are silly, unfair and unfounded. Worse, they deliberately sidestep and hide at least two main reasons why this whole episode took place.

First, the organising of the congress by the University of Malaya and three other public universities funded by public money, three of which having a multi-ethnic student and teaching population.

When the congress was first announced, Gerak expressed our unease with it, especially when it sounded like a sabre-rattling, race-baiting gathering rather than an intellectual meeting.

But we were then quickly assured by a senior official that it was a congress to discuss “research findings” that, in turn, could dispassionately inform policy.

What transpired instead was what we suspected and feared – much chest-thumping and very little concrete empirical findings. It was indeed much like a blame if not a hate-fest, led by problematic emeritus professor Zainal Kling, renowned for once claiming that we were never colonised.

Be that as it may, this congress and University of Malaya’s involvement was what Wong’s action was related to. This is something we cannot simply push aside in assessing his action.

Lodging a police report against Wong, withholding his transcripts and degree, and mustering disciplined but bored-looking students to protest against him all smack of immaturity, small-mindedness and the overreaching of the powers held by the university authorities.

Such use of force and censure is not only unnecessary and disgraceful, but also shows little respect for human rights and goes against the spirit and principles of debate and discussion.

Such principles are precisely what Gerak has long been fighting for and what the education minister has consistently encouraged and supported in our attempts at bringing much-needed reforms to our education system.

Hence, let us thank him for waking some of us up, but let us look beyond the “tree” that is Wong Yan Ke.

Indeed, let us examine and critique the “wood” that is essentially the politicisation of our premier universities and the negative implications for academic autonomy, quality, and, most important, academic integrity.

Our voluntary writers work hard to keep these articles free for all to read. But we do need funds to support our struggle for Justice, Freedom and Solidarity. To maintain our editorial independence, we do not carry any advertisements; nor do we accept funding from dubious sources. If everyone reading this was to make a donation, our fundraising target for the year would be achieved within a week. So please consider making a donation to Persatuan Aliran Kesedaran Negara, CIMB Bank account number 8004240948.
Subscribe
9 Comments
Newest
Oldest Most Voted
Inline Feedbacks
View all comments

ABOUT US
Aliran is a reform movement in Malaysia promoting justice, freedom and solidarity.
Contact us: [email protected]
FOLLOW US
Content may be reproduced without alteration but please attribute to aliran.com
wpDiscuz
9
0
Would love your thoughts, please comment.x
()
x
| Reply