Home Coalitions Clean and Fair Elections Bersih 2.0 calls on Malaysians to come down to the streets for... 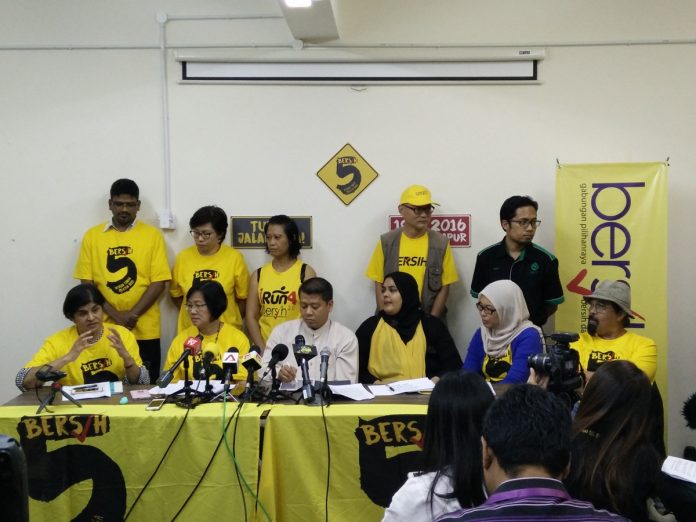 This Saturday, Bersih 2.0 will take to the streets for the fifth time for Bersih 5 to peacefully protest the grand corruption of 1MDB, demand for institutional reforms and a new Malaysia.

Bersih 2.0 has fulfilled the requirements under the Peaceful Assembly Act 2012 and will proceed with the Bersih 5 peaceful rally as planned.

On 19 November 2016, rally-goers will gather in two places – Bangsar LRT (Dataran Maybank) and Masjid Negara – at 10am. At 12.30pm the groups will converge on Dataran Merdeka and the rally programme will commence before officially ending at 6pm.

Personnel from the Bersih Security Team, clad in purple, will be stationed throughout the three main areas: Bangsar LRT, Masjid Negara, and Dataran Merdeka. Comprising 1,400 personnel, they will handle all incidents of confrontation, violence, and general security.

Should any rally-goer encounter any provocation, do not engage and move away from the scene. Security personnel will take it from there. For more detailed instructions, refer to the Bersih 5 security brief and code of conduct attached with this statement.

The Bersih 5 programme was kickstarted on 1 October 2016 with the Bersih 5 convoy with the main objective of spreading Bersih’s message of institutional reforms beyond urban boundaries. To this end, Bersih 5 is already a success.

Taking place over seven weeks, the Bersih 5 convoy has visited 236 cities, towns, and villages across Malaysia where our presence and message have been well-received. The convoy owes its success to the hard-working local committees, participants and supporters who have organised and seen the convoy through without backing down from intimidation by certain quarters.

The Bersih 5 convoy will culminate in the peaceful rally on 19 November in Kuala Lumpur, Kuching, and Kota Kinabalu.

We are taking to the streets because there is something rotten in the state of Malaysia. Poor governance and a lack of accountability have resulted in the grand corruption of 1MDB. The Electoral Commission’s recent unconstitutional redelineation exercise drives the country further away from clean and fair elections. Voices of dissent continue to be silenced while acts of criminal intimidation and violence committed by thugs and gangsters are normalised.

As the day draws closer, Bersih 2.0 calls on Malaysians to join us on the streets this Saturday to demand:

3) the strengthening of parliamentary democracy

4) the right to dissent

5) the empowerment of Sabah and Sarawak

For those who are unable to make their way to the rally, continue to show your support by wearing Bersih T-shirts or anything yellow, or significantly display or do something with yellow.

Let us all unite to send the government a powerful collective message that we deserve better.