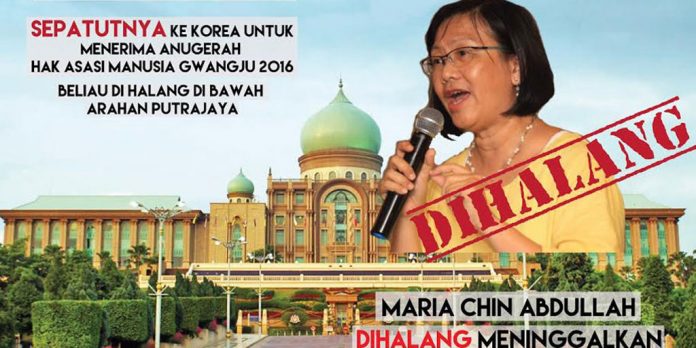 Bersih 2.0 chairperson Maria Chin Abdullah was barred from leaving the country on 17 May 2016. No proper explanation was given to Maria as to why she is being banned, except that the instruction was from Putrajaya.

This action is an infringement on Maria’s constitutional right and freedom of movement. It is politically motivated and shows a desperate government clutching on to power when it should be accountable and engaging with the rakyat on key issues challenging this country.

Ironically Prime Minister Najb Razak is allowed to travel abroad when he is supposed to be in Parliament answering crucial questions. Directors of 1MDB and convicted murderer like Sirul Azhar are allowed to leave the country, but not Maria Chin, a human rights activist.

Maria was supposed to travel to South Korea on behalf of Bersih 2.0 to receive the 2016 Gwangju Prize for Human Rights.

The Gwangju Prize for Human Rights is a highly prestigious award given in recognition of individuals and organisations that have contributed in promoting and advancing human rights, democracy, and peace. Past recipients include former East Timor President Xanana Gusmao, and Nobel Laureate Aung San Suu Kyi.

The Gwangju Human Rights Prize to Bersih 2.0 is an award that recognises the bravery and commitment of Malaysians who have fought for greater democracy and rights throughout the years.

Bersih 2.0 demands that Najib, Deputy Prime Minister Zahid Hamidi and the immigration give an immediate explanation as to why we are denied the right to receive the award. Bersih 2.0 also wants to know if this means Maria is under ‘house arrest’ as she is denied her travel rights.