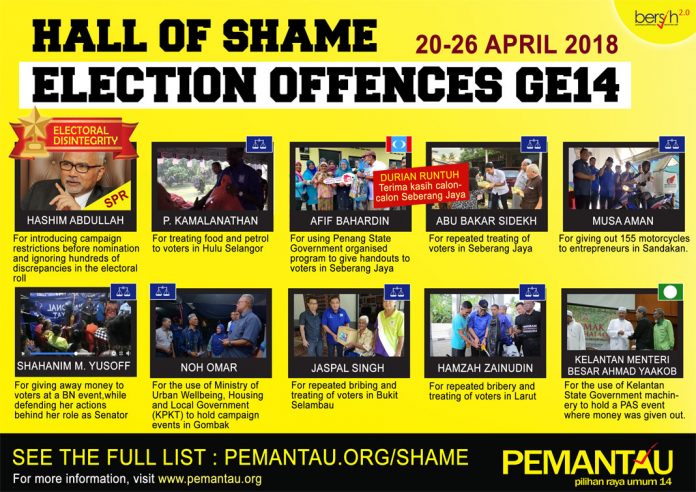 On 29 April, Bersih 2.0 unveiled a new line-up for the 2018 general election Hall of Shame on Election Offences, which lists out the top 10 electoral offenders up to 26 April 2018.

The second 10 inductees into the Hall of Shame (in no specific order), selected from over 300 verified reports up to and including 26 April are as below:

For this week, the chairman of the Electoral Commission, Mohd Hashim Abdullah, earned a special 5-Star Award of Shame for failing to clean up the electoral roll properly, which led to many public complaints and called into question the integrity of the elections. He is also being held responsible for the arbitrary and unfair changes of election regulations without consultation at the eleventh hour of the nomination day.

We are appalled that the conduct of undue influence of voters through various forms of bribery continues unabated with the majority of the cases involving politicians from Barisan Nasional, especially its main component party, Umno.

As the election campaign has officially started after nomination day, Bersih 2.0 calls on all political parties and their candidates to campaign on their manifesto and policies that they will implement when they come into power, rather than resort to bribery, dishing out goodies, and threats in getting the support of voters.

As the Election Offences Act has kicked in on 28 April, Bersih 2.0 will monitor even more closely the conduct of all stakeholders, especially the Electoral Commission, political parties and candidates.

New inductees to the Hall of Shame will be announced every Friday, up to 9 May 2018. To view the map of electoral offences, please visit aduan.pemantau.org/map

Bersih 2.0 urges anyone who witnesses an election offence to report online 1) at aduan.pemantau.org, 2) through WhatsApp on 011-17721546 or 3) call 03-79314444. It is necessary for perpetrators of these offences to be called out and held accountable so that the principles of clean and fair elections are upheld throughout the 2018 general election.