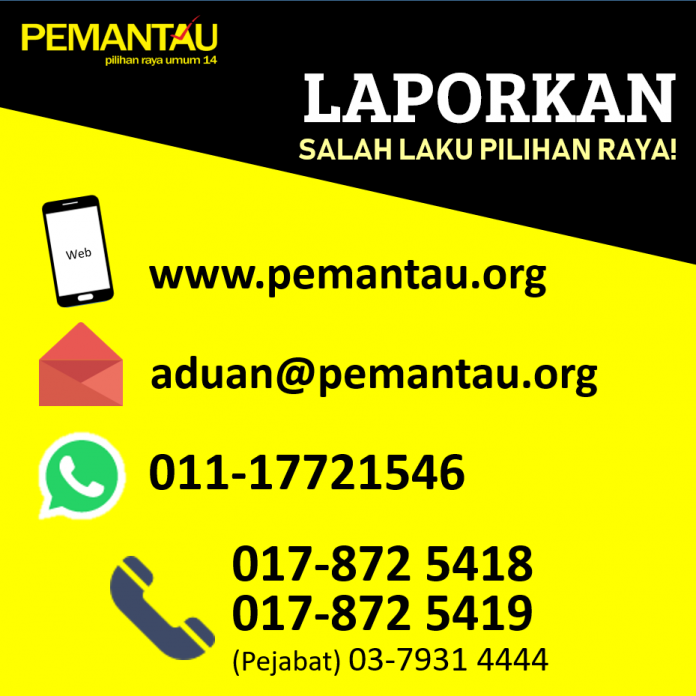 The Coalition for Clean and Fair Elections (Bersih 2.0) urges all voters to go out and vote today, 9 May 2018, in a bid for Malaysians to meaningfully determine the future of our nation.

A massive turnout of voters is the only way to defeat all the manipulation and cheating that is designed to skew election results.

Bersih 2.0 also reminds all parties – all political parties, party members, candidates, campaign workers, Electoral Commission officers and election workers, voters and government institutions and enforcement agencies such as Rela and the police – to refrain from committing or being involved in any crime of electoral fraud on polling day.

Bersih 2.0 warns that under the Election Offences Act 1954, impersonation, treating, undue influence, and bribery are all punishable with imprisonment of less than two years and a fine of RM1,000 to RM5,000 or both.

We also remind everyone that offences such as forging election documents, voting without the right to vote, voting more than once, preventing voters from voting, and refusing to count acceptable votes are all serious crimes under the Election Offences Act that carry a punishment of a maximum of two years’ jail or a fine not exceeding RM5,000 or both.

Bersih 2.0 calls on all public members to be our eyes and ears on all these offences and lodge reports of any irregularities to the following:

Voters who encounter difficulties in voting or are denied the right to vote may also lodge complaints with Pemantau, Bersih 2.0’s independent election observation initiative, through the contact details listed above.

Bersih 2.0 reminds all stakeholders to remain calm and peaceful throughout the election. With passions running high on both sides of the political divide, it is imperative that voters remain focused on voting and monitoring for clean and fair elections.