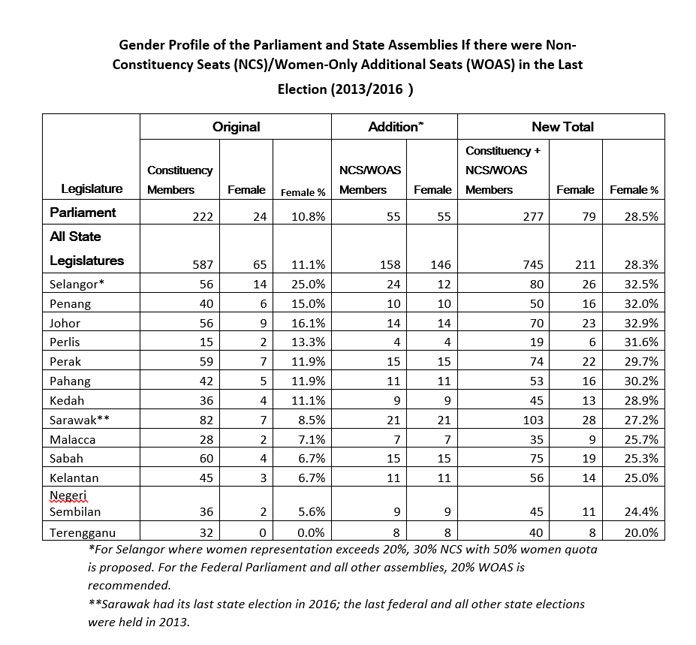 The Coalition for Clean and Fair Elections (Bersih 2.0) has urged Prime Minister Najib Razak to introduce women-only additional seats in Parliament and the state assemblies instead of appointing 30% women in the Senate.

Najib should move to create 20% women-only new seats for all legislatures with currently fewer than 20% women representation, adopting the solution championed by the 2017 National Conference on Gender and Electoral Reform organised by Institut Wanita Berdaya (IWB) on 18 November 2017.

Bersih 2.0 stresses that these systemic solutions are what we need to reach the minimum 30% women representation, the global standard since the 1995 Beijing platform.

Malaysian parties lack the commitment and determination to increase women representation under the first-past-the-post electoral system. Since this system allows only one candidate in a constituency, nominating one more woman means having to replace a male incumbent or candidate.

Non-constituency seats or women-only additional seats are like the party list proportional representation system in Indonesia, South Africa, Sri Lanka and 83 other countries in the world, where one constituency elects many representatives, parties nominate candidates in “lists”, voters vote for parties, and seats are allocated to parties based on their vote shares.

Under this system, seats are sometimes called “non-constituency” if the entire country or state is made into a large constituency.

By imposing a 50% or 100% women quota on these additional seats, the gender imbalance will be immediately reduced.

Bersih 2.0 points out that had the last parliamentary and state elections were been held with non-constituency seats or women-only additional seats as proposed by the national conference, our legislatures would have been more gender inclusive.

For example, if 55 women-only seats were added to Parliament’s current 222 seats, making a total of 277 seats, such women-only seats would constitute 20%. Even with only 24 women elected from the constituencies, these additional 55 members would ensure that  Parliament would have 79 women members or 28.5%. (see Table below)

Aside from Barisan Nasional, Bersih 2.0 also calls upon Pakatan Harapan and Pas to support the idea of women-only additional seats or non-constituency seats and implement it in  Selangor, Penang and Kelantan where they rule.

The addition of women-only additional seats to Malaysia’s first-past-the-post system would make it resemble the mixed-member majoritarian system implemented in Japan, South Korea, Taiwan and 20 other countries, except that voters can directly vote for the parties in those countries.

The conventional mixed-member majoritarian system would give voters two separate ballots: one ballot to vote for a constituency representative under the first-past-the-post system and another ballot to vote for a party under the party list proportional representation system. Hence, this innovation can be a pilot test before a full switch from first-past-the-post to a mixed-member system.

While the prime minister’s concern for women’s under-representation in politics is welcome, the offer to appoint 30% women senators after the general election is a cheap political gimmick.

On the same note, Bersih 2.0 urges the prime minister to implement women-only additional seats in Parliament in time for the general election. This would ensure that the 30% quota will be met and that there will be a significant percentage of women’s representation in the law-making process.

There are 70 senatorial posts but currently only 62 are appointed, with 12 being women. The federal government, Pahang and Johor have six, one and one vacancies to fill.

If the prime minister so wishes, he could immediately have eight women appointed as senators and the women’s percentage in the Senate would immediately reach 28.5%, without having to wait for the general election.