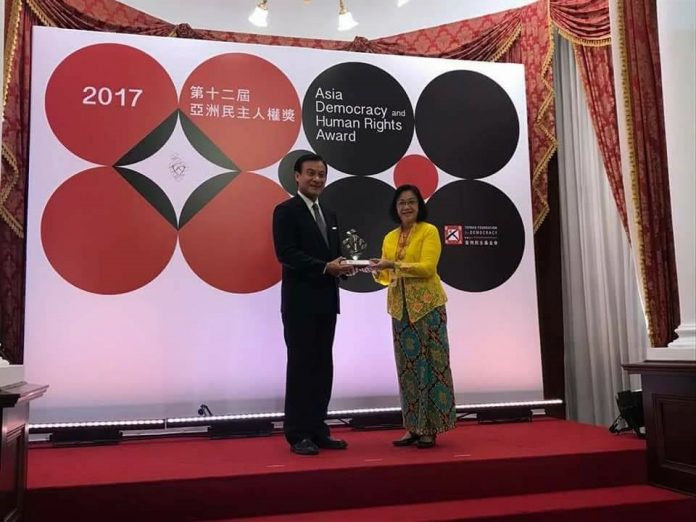 Bersih is honoured to receive the prestigious Asia Democracy and Human Rights Award (ADHRA) as it is a recognition of the democratic struggle of the people of Malaysia.

Bersih received the award from the chairperson of the Taiwan Foundation for Democracy on International Human Rights Day, celebrated annually on 10 December.

After 10 years of fighting for clean and fair elections, institutional reform and demanding a just and representative electoral system, Bersih and its supporters have come a long way in breaking through the culture of fear, religious divides, and discovering strength through solidarity and a dream of a fair and democratic Malaysia.

“It is most apt that this award comes to us at this time, just as we are celebrating 10 years since Bersih 1 in 2007. Despite the arrests, intimidation and harassment of our supporters, Bersih has emerged resolute in their quest for justice and democracy. This could never happen without the peoples support, confidence and bravery. So thank you Malaysians for giving us hope for a better Malaysia,” comments Bersih chairperson Maria Chin Abdullah.

Throughout these years, Bersih has been successful in mobilising hundreds and thousands to the streets, to stake their claim to freedom of expression and assembly, resulting in the biggest democratic assembly in the history of Malaysia, during Bersih 4.

Among Bersih’s other successes are the setting up of a parliamentary select committee for electoral reform with 22 recommendations, (the) use of indelible ink during elections, as well as the empowering of overseas voters.

During the last general election, Bersih was able to mobilise 3,000 independent electoral observers through its Pemantau campaign and received over 3,000 reports of electoral fraud and offences.

READ MORE:  Bersih 2.0 is proudly supported by Malaysians, not by the US or any foreign powers

Earlier this year, more than 80,000 voters objected to unfair delineation, the highest amount of objections to date. Owing to lack of action on the part of the Electoral Commission, Bersih has taken to the court to demand accountability and corrective action.

“This win belongs to the people of Malaysia, as we strive for reform towards a more democratic Malaysia. However, the struggle does not end here. We need the people to stand up and protect their right to vote.”

Bersih is currently recruiting Malaysians to sign up as volunteer independent observers under its Pemantau campaign. For more information, please log onto pemantau.org.