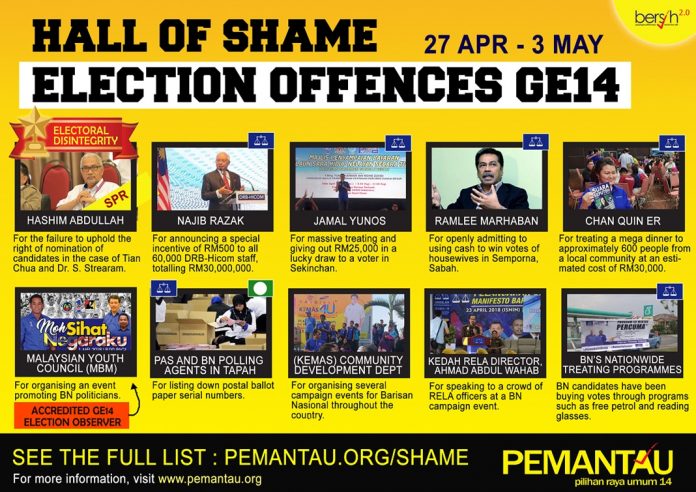 The Coalition for Clean and Fair Elections (Bersih 2.0) today announced a new list of top 10 offenders in the 2018 general election Hall of Shame on Election Offences for the week of 27 April to 4 May.

This new line-up of 10 inductees into the general election Hall of Shame, the last to be issued for the week preceding polling day, listed in no specific order, are selected from over 400 verified reports, spanning electoral offences and unfair practices on nomination day, the issuance of postal ballots and one week into the campaign period.

The 10 inductees are listed as below:

Once again, the chairman of the Electoral Commission, Mohd Hashim Abdullah, earned a special 5-Star Award of Shame for the second time in a row for failing to address and rectify serious abuse of power by its officers on nomination day including the unfair disqualification of incumbent MP Tian Chua (PKR) and the unfair prevention of Dr S Streram (also from PKR) from filing his nomination papers. The police barred the latter entry for not having an entry pass issued by the Electoral Commission, which resulted in an uncontested win for BN candidate Mohamad Hasan, who happens to be the caretaker chief minister of Negeri Sembilan.

Bersih 2.0 notes that despite having been featured in the general election Hall of Shame, the Electoral Commission and Barisan Nasional continue to disrespect, disregard and diminish the principles of clean, free and fair elections by ignoring the Election Offences Act 1954 and proceeding with the arbitrary use of power and influence to skew the elections in favour of Barisan Nasional.

The Electoral Commission and its 445 enforcement teams have failed to respond to the rampant treating, vote-buying, undue use of influence and biased behaviour of public institutions. They have instead focused on taking down banners which do not comply with their arbitrary new campaign material guidelines issued on 24 April.

Bersih 2.0 condemns the lack of action by the Electoral Commission and the Malaysian Anti-Corruption Commission (MACC) in responding to the attempts by the ruling coalition, the Umno-led Barisan Nasional to steal the coming general election. The commissioners of both the Electoral Commission and MACC must answer to the people and voters of Malaysia for their repeated failure to uphold the highest law in the country, the Federal Constitution.

READ MORE:  Ismail Sabri must not threaten Sarawak members of the 'Malaysian family'

Bersih 2.0 strongly warns all political parties and candidates to immediately cease and halt all bad campaign strategies aimed at vote-buying and treating of voters as it is a criminal offence and may be cause to challenge an electoral win through an election petition.

Bersih 2.0 also warns all political parties and candidates against bribing and treating on election day as the campaign period officially ends at midnight, 8 May 2018.

Bersih 2.0 also urges all political parties, candidates, civil organisations and voters to reject all forms of bribery and treating including the cash handouts and lucky draw prizes. We also urge all political parties and candidates vested in clean and fair elections to start preparing for election petitions in anticipation of further attempts to diminish, skew and steal the elections.

It is the responsibility of all stakeholders to ensure that the GE14 is representative of the people’s choice for Malaysia and not the result of gerrymandering, corruption and arbitrary use of statutory powers. To view of map of electoral offences, please visit aduan.pemantau.org/map