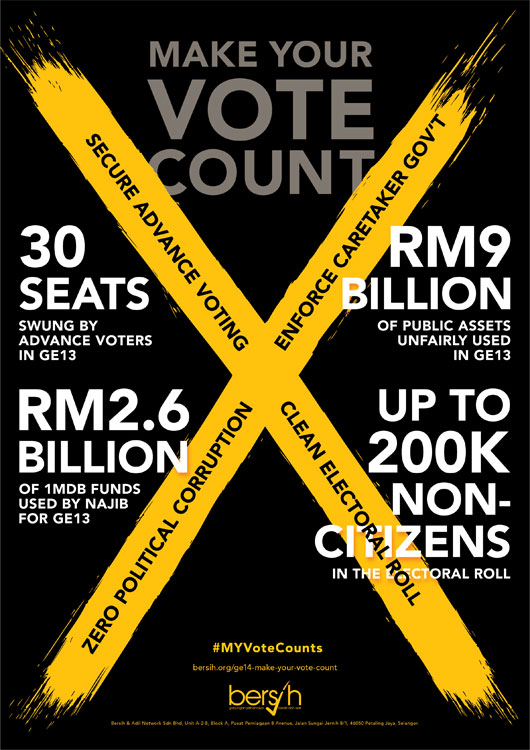 Bersih 2.0 wants the government to implement a code of conduct for a caretaker government – which was rcommended by a parliamentary select committee in 2012.

This is a best practice in functioning democracies but it is not in Malaysia because… well, when one has governed the country since Independence with many checks and balances eroded, let’s just say the status quo works to its advantage.

But actually, the Electoral Commission has the power under Article 113(5) of the Federal Constitution to make rules for the purposes of its functions. These rules may include prohibiting the use of public institutions or government machinery by the government of the day in their political and election campaigns.

Bersih 2.0 wants the government to implement a code of conduct for a caretaker government. The aim of these guidelines is to ensure that during the caretaker period, the federal and state governments conduct themselves appropriately so that, although the business of government service and administration continues, major decisions and actions must be avoided so that they do not bind an incoming government.

The must nots and musts of a caretaker government from the time of the dissolution of Parliament or state assembly until the time the incoming government takes office:

A caretaker government must not:

READ MORE:  Parliamentary scrutiny of government is not 'playing politics'
Support the struggle to build a Malaysia based on Justice, Freedom, Solidarity:


The report of the Parliamentary Select Committee on Electoral Reform Report recommended in April 2012 that within three months the Electoral Commission should prepare a guideline and code of conduct on the functions of a caretaker government at both state and federal levels.

Guess what the commission has done since about this…

So let’s push for this for the coming general election!

But there’s a whole lot more. Click here to find out what else is needed.