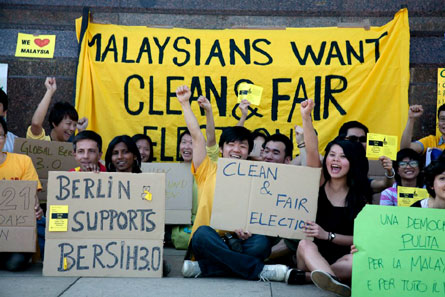 Gabungan Bertindak Malaysia (GBM) urges all Malaysians to demand institutional reforms by participating in the peaceful assemblies of Bersih 4 in Kuala Lumpur, Kuching and Kota Kinabalu on 29-30 August.

GBM says, Bersih 4’s demands — (a) clean elections (b) clean governance (c) right to dissent and (d) saving the economy — are universal and should be upheld by all parties.

GBM calls upon all political leaders and parties from both sides of the divide to study, support and realise Bersih 2.0’s full agenda of 10-point institutional reform, from where the four demands are derived:

GBM holds that only serious institutional reforms can ensure political, economic and social solidarity in Malaysia. The mere changing of the prime minister, the deputy prime minister or ministers will not lead Malaysia out of the current crisis.

GBM says, only these institutional reforms can address the three main causes of rampant and highest-level corruption like the 1MDB cases: manipulated elections, power concentration in the Executive and suppression of dissent.

GBM calls upon ordinary Malaysians to demand these reforms to end the current misery caused by corruption and mismanagement – the rakyat’s tax burden, inflation, currency depreciation and leakages.

READ MORE:  Wanted: A leader with the people’s interests at heart

GBM urges the Police to uphold the right to freedom of assembly provided by Article 10(1)(b) of the Federal Constitution and ensure peace and order for the 34-hour rally, from 29 August, 2.00pm, to 30 August midnight.

This statement is endorsed by the following member organisations of Gabungan Bertindak Malaysia: