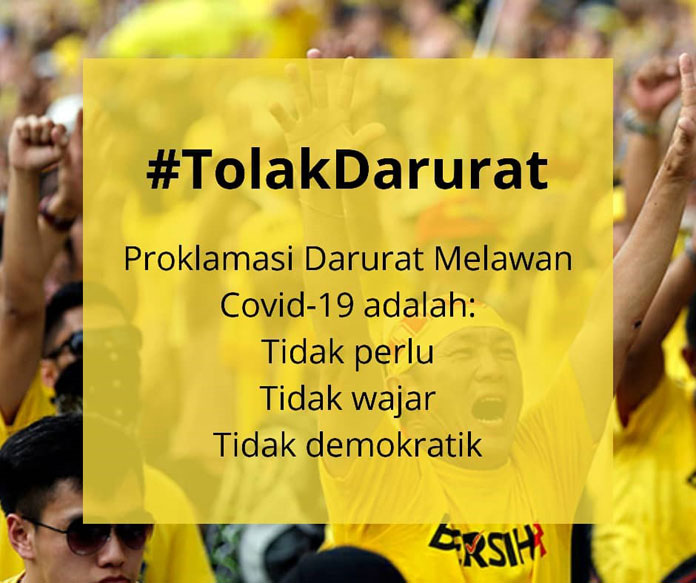 The Coalition for Clean and Fair Elections (Bersih 2.0) urges Prime Minister Muhyiddin Yassin to reach out to parliamentary Opposition Leader Anwar Ibrahim and Pakatan Harapan as the official opposition for a confidence-and-supply agreement.

His alternative option is resignation in the event of budget defeat, not emergency which is a self-coup.

The full position of Bersih 2.0 is as follows:

• The proposed proclamation of emergency is an open admission that the prime minister has no confidence that his budget will be supported by all 113 government MPs despite Umno’s pledge to support the government. Federal Territories Minister Annuar Musa’s open question on what law if not emergency can prevent elections confirms this fatalist sentiment is prevalent in the cabinet since the emergency proposal is approved by the cabinet.

• An emergency proclamation is a self-coup to subvert parliamentary democracy
– It is unconstitutional because Article 150 only permits it for “imminent danger” that “threatens the security, or the economic life, or public order”. Government survival is not a permissible ground.
– It is irresponsible, counterproductive and in fact “[threatening] economic life” by causing panic and a crash in markets, chasing away investments, inviting international sanctions, hence, driving up unemployment and hurting ordinary people’s struggle to put food on the table and pay bills.
– It will magnify the political crisis by dragging the palaces into partisan conflicts, as the proclamation has to be issued by the Yang di-Pertuan Agong, risking political unrest as in Thailand and Indonesia.

• Minority governments in countries from the UK and Denmark to Canada – the latest just on 21 October – have passed their budgets with support from the opposition on a confidence and supply agreement basis. As Malaysia’s permanent coalition model is disintegrating, a confidence-and-supply agreement is a new norm that we have to embrace.

• If Muhyiddin Yassin is convinced he will lose some government MP’s support on the Budget, then he must demonstrate maturity and courage to reach out to the official opposition for a confidence-and-supply agreement before Budget Day. A confidence and supply agreement may necessitate certain reforms including parliamentary reform, electoral reforms and other institutional reforms and equal funding for all Mps as well as the Opposition’s input to make the Budget more inclusive and prudent and to prevent a similar political impasse from recurring. A Muhyiddin-PH confidence-and-supply agreement would have 204 votes at the maximum and can afford any defection.

• If Muhyiddin insists on not having a confidence-and-supply agreement bill with the official opposition, then he must resign if his budget is defeated. Malaysia will not have to go for a snap poll or risk not having a budget, as the House can pass a vote of confidence in another MP to form a new government and to continue with the budget. Even if the PM leads only a minority government, he or she can humbly seek a confidence and supply agreement with opposition parties.

Since our joint statement with Gabungan Bertindak Malaysia (GBM) and Angkatan Belia Islam Malaysia (Abim) on 10 June 2020, we have urged for the government and the opposition – regardless of which parties are on which side – to come together to build a healthy environment for multi-party competition, which includes an end to selective prosecution and impunity, parliamentary reforms, political financing reforms, recall elections, electoral system changes and decentralisation.

Our call for a confidence-and-supply agreement in our statement on 23 October 2020 titled “Is Muhyiddin launching a self-coup in order to stay in power?” reflects our principled and informed position as a non-partisan group in defending and deepening democracy.

We strongly regret that a few media have misrepresented our position with misleading headlines like “Save budget, don’t vote out Muhyiddin, says Bersih” and “Bersih 2.0 urges opposition not to vote against PN in no confidence, budgetary matters”.

Whether such misrepresentation is due to poor comprehension, clickbait calculations or any partisan agenda, we urge those media practitioners to demonstrate their professionalism and integrity at all times. To members of the public, if you come across dubious reports of Bersih 2.0-related news, please visit our website www.bersih.org or check more credible media for verification.