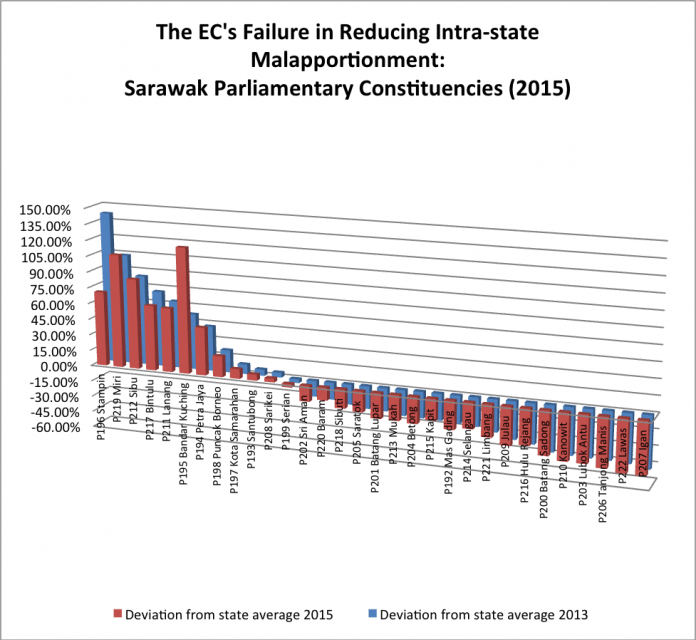 The Coalition for Clean and Fair Elections (Bersih 2.0) condemns the Election Commission (EC) for serious flaws in both the proposal and procedure in the constituency redelineation exercise for Sarawak hastily started.

The EC must immediately rectify its errors in displaying incomplete maps and gross malapportionment. As our preliminary response on the exercise, we have five questions and one commendation for the EC.

Why are the maps incomplete?

Bersih 2.0 is shocked that the EC has provided incomplete maps in that polling district boundaries are not shown.

The normal electoral map consists of boundaries of parliamentary and state constituencies as well as polling districts, as in the sample of the Sibu parliamentary constituency map used in the 2013 General Election.

In comparison, the EC has only released a state-wide map for all constituencies this time round (see right).
EC Sarawak delineation maps

By denying the voters the knowledge of polling district boundaries, the EC is undermining the people’s ability to meaningfully evaluate the EC’s recommendation and consider other possible combinations of polling districts. Hence, the EC maliciously violates the demand of Federal Constitution that “regard ought to be had … to the maintenance of local ties,” (italics ours) as per its Thirteenth Schedule, Part 1, Section 2(d).

Without the polling district boundaries, the voters also cannot evaluate whether their polling districts have “administrative facilities” to facilitate voting, as implied by Thirteenth Schedule, Part 1, Section 2(b).

Since such incomplete maps were never used in the past, the EC must answer if such maps denotes a new modus operandi for the entire nation, or it is deliberately discriminating against the Sarawakians.

We fully support the ultimatum posed by Mr Baru Bian, Adun for Bakelalan and Sarawak PKR Chief for the EC to provide detailed constituency-level maps within seven days or be prepared for a judicial review hearing.

Why are the maps not displayed online?

Bersih 2.0 cannot understand why the EC refuses to put all its maps online so that more people including out-of-town voters can assess the quality of the EC’s redelineation proposal and take part in the objection project.

Why does the EC insist on conducting its business in a pre-internet manner?

Why can’t the EC do what Bersih 2.0’s Delineation Action and Research Team (Dart) and Tindak Malaysia have been doing: sharing electoral information online?

Will the inquiries be open to lawyers, media and all members of the public?

Bersih 2.0 reiterates our call for the inquiries, which must be held in the event of valid objections after the one-month objection period, to be open to lawyers, media and all concerned members of the public.

The EC has told political parties in their briefing that every group of objectors is limited to three representatives without legal representation and a session of 30 minutes.

Bersih 2.0 would like to remind the EC that it must act constitutionally in discharging its duty. It should aim to maximise public participation in the redelineation and minimise both malapportionment and gerrymandering.

Bersih 2.0 vows to support legal actions by any citizen who has been unconstitutionally excluded or disadvantaged by the EC.

Why is intra-state malapportionment not reduced?

Bersih 2.0 holds that the entire idea of redelineation is to reduce malapportionment and gerrymandering that have occurred since the last redelineation. On this yardstick, the EC has failed miserably.

The chart below shows that malapportionment of parliamentary constituencies that appeared in the 13th General Election has hardly been reduced in the proposed redelineation. (Between 2013 and 2014, on which the redelineation was based on, the electorate has grown insignificantly by 2.32 per cent and does not invalidate the comparison.)

The EC has completely ignored the requirement of the 13th Schedule, Part 1, 2(c) where constituencies within the same state are supposed to be “approximately equal” in size, with exceptions given to inland constituencies.

While this means some seats like Hulu Rejang or Baram can be much smaller than the state average, there are no grounds for outliers at the higher end, resulting in gross under-representation of urban voters.

We urge the constituents in the 27 proposed state constituencies that are larger than the state average by 15 per cent to object to their unconstitutional under-representation as a group of 100 or more affected voters in the one-month period ending 4 February.

Again, while very small inland constituencies may be justified, outliers at the higher end are absolutely unconstitutional. The voters of the abovementioned constituencies and 20 others that are larger than the state average by 15 per cent should object to their unconstitutional under-representation as a group of 100 or more affected voters in the one-month period ending on 4 February.

The most telling example of the EC’s deliberate crime of malapportionment is P200 Batang Sadong, a constituency which is 45 minutes away from Kuching and well connected by roads, which has only 20,977 voters, with three state constituencies, the smallest being N26 Gedong (6,340). This is in sharp contrast with P195 Bandar Kuching (78,394 voters) with three state constituencies, the largest of which being N10 Pending (30,881 voters).

We call upon the EC to recognise the unconstitutionality of its current proposal and make amends in the inquiry process. Bersih 2.0 is ready to support any disempowered citizens to challenge the EC in the court of law.

Bersih 2.0 questions why the EC needs to commence the redelineation exercise in such haste while the nation’s attention is still on flood relief.

Is this a deliberate plot of the EC to prevent national attention and maximum public scrutiny on the redelineation exercise in Sarawak?

Bersih 2.0 reiterates our position that must be heeded—the electoral roll must be cleaned before redelineation begins. The findings of the Sabah RCI on immigrants should serve as a constant reminder of how crucial this is.

Bersih 2.0 nevertheless congratulates the EC for acting constitutionally by abiding by the number of parliamentary seats allocated for Sarawak as per Article 46 of the Federal Constitution.

This is the first time that redelineation involves seat increase only at the state level and not at the federal level. It shows the EC does heed the advice from civil society to not usurp the power of the Parliament and state legislatures to decide their sizes.

The EC should bear in mind that if Parliament increases its seats for Sarawak in the near future, the EC will have to conduct another round of the redelineation exercise to implement the seat increase. It cannot simply relocate the state constituencies delineated in this exercise to the new number of parliamentary seats without public participation as per the Thirteenth Schedule of the Federal Constitution.

READ MORE:  Sarawak election: Who is in the mix?

Bersih 2.0 calls upon all Malaysians to pressure the EC to make the changes we are recommending as this will not only affect Sarawak for the next 10 years or so, but the same pattern will likely be repeated for redelineation in West Malaysia and Sabah.

The Steering Committee of Bersih 2.0, which comprises: